Lawyers have supported a call for the cancellation of the 2021 annual vacation for judges. 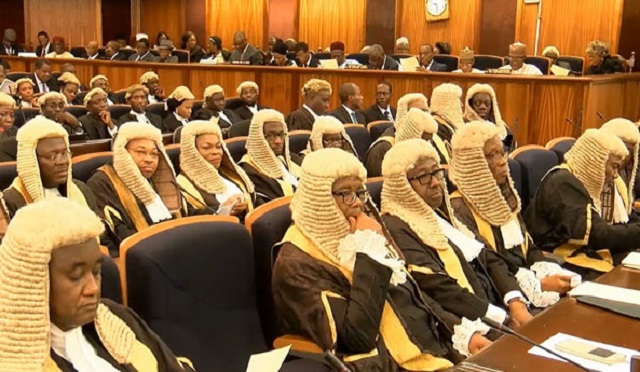 Lawyers have supported a call for the cancellation of the 2021 annual vacation for judges.

Bolaji Ayorinde (SAN), a former chairman of the Legal Aid Council of Nigeria, had written a letter to the Chief Justice of Nigeria requesting the suspension of the judges’ annual vacation.

Mr Ayorinde said suspending the vacation would save the nation’s justice system.

The lawyers expressed a similar view in separate interviews with NAN on Thursday in Lagos.

Mr Ayorinde, in a four-page letter, cited the #EndSARS protests, COVID-19 pandemic, and the recent JUSUN strike as events that adversely impacted the justice sector.

He added that the suspension would be an opportunity for the judiciary to make a bold statement to rekindle the hope of the common man and renew investors’ confidence in Nigeria as an investment destination.

The letter was titled ‘The need to suspend 2021 Annual Court Vacation.’

Reacting to the letter, Chibuikem Opara, a lawyer with Justification Law Firm, Ikeja, said, “The call for the suspension of the judges’ vacation is timely.

“I expect the judges themselves to decline any call for vacation and concentrate on how they can reduce accumulated cases.”

Mr Opara added, “In the last one year, the courts have not sat cumulatively up to six months, from the imposed sit at home caused by the pandemic, the ensuing #EndSARS resulting to the closure of courts and the JUSUN strike.

“It is obvious that insisting on observing the customary court vacation will not do anybody any good.”

Chris Ayiyi, principal partner, Ayiyi Chambers, also agreed that the judges’ vacation be suspended to save the nation’s justice system.

“I concur with the learned silk’s submission. The reasons are endless.

“There are persons who are languishing in detention, awaiting trial, and those whose cases have suffered undue delay due to irrelevant factors,” Mr Ayiyi explained.

Bayo Akinlade, the convener of Fight Against Corruption in the Judiciary (FACIJ), said it would be noble of the chief judge and judges to suspend the annual vacation.

“The calls to jettison vacations were made last year because of COVID -19, but there were negative responses,” he said.

According to him, an average high court in Lagos gives two to 12 weeks’ adjournment between cases.

Mr Akinlade, however, said, “But you and I know that for Lagos courts, you are more likely to be heard zero times within a space of two months. If an average judge in Lagos has between 400 to 800 cases in his docket, your case is likely to be heard between two to three times in one legal year.

“So we have more pressing issues on how to develop our justice delivery system.”