Held in Kinigi at the foothills of Volcanoes National Park, in Rwanda’s northern district, Kwita Izina 2022 saw a gathering of friends, family, colleagues, and well-wishers. 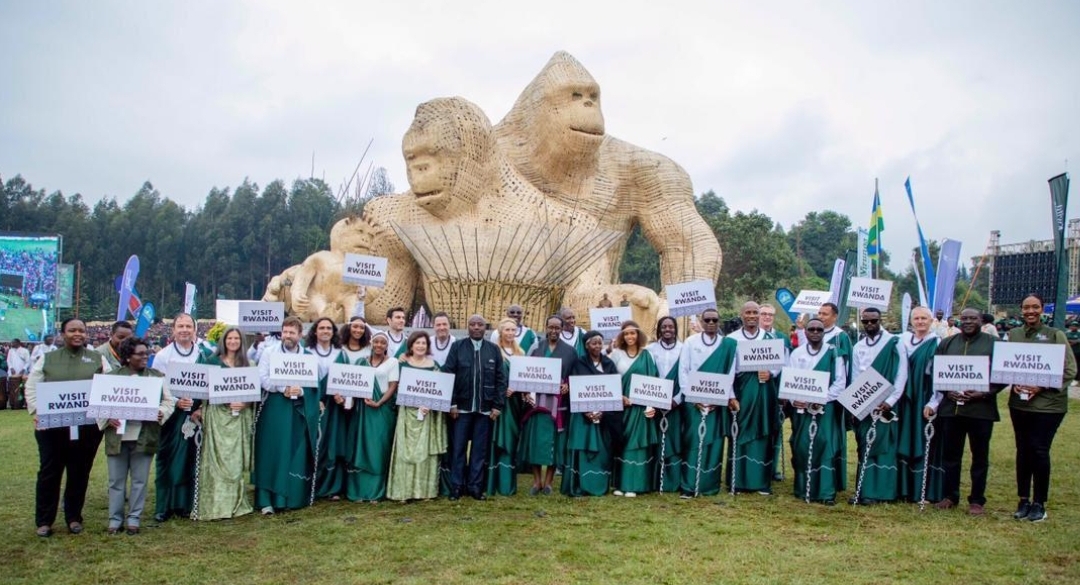 When we were born, we were given names. Some of us were named by our parents, some by adoring grandparents, relatives, adoptive parents or guardians. But we all had one thing in common; a name by which we were called.

Some of us were named after loved ones, famous icons, religious leaders or deities. Our names meant something to our namers and were expected to mean something to our communities and societies at large, while also giving our lives a purpose.

In most African traditions, we believe that our name play a very crucial part in our lives, telling the story of who we are, our origins, where we come from, sometimes the circumstances surrounding our births, our character/personality and the paths in which we are destined to follow. This why, in traditional African communities, it is of utmost importance to carefully and thoughtfully select the name for a baby, while some even consult deities or seek spiritual guidance before selecting their baby names.

The naming ceremony announces the birth of a newborn and provides an avenue to introduce the child to the extended family, the larger community, and above all, it confers on the child a name.

When I received the email from the Rwanda Development Board, inviting me to a special naming ceremony in Rwanda, I was intrigued.

Intrigued and curious because this was no ordinary naming ceremony. This was Kwita Izina, a special ceremony to name Rwanda’s baby mountain gorillas. You see, like several African societies, Rwandans have been naming their children in a ceremony with family and friends for centuries.

As their name implies, mountain gorillas live in forests high in the mountains, at elevations of 8,000 to 13,000 feet.

Rwanda’s mountain gorillas can be found in the Virunga Mountains, a range of extinct volcanoes that border three East African nations; Rwanda, and Uganda. These magnificent species have thicker fur, compared to other great apes, that help them survive in the very cold habitat where temperatures often drop below freezing point.

However, human encroachment, civil conflict and poaching activities over the years had pushed the gorillas farther up into the mountains, forcing them to endure dangerous and sometimes deadly conditions. Their numbers reduced and the species became critically endangered.

Until the story changed.

Rwanda’s intensive conservation efforts over the last few decades have seen to it that the mountain gorillas are not only protected, but are given room to thrive in their national habitat. As at the latest count, there are approximately 1,000 mountain gorillas in the wild, with 604 in the Virunga Massif.

According to the management of Rwanda’s Volcanoes National Park, there are currently twelve gorilla families living in the park, which are fully habituated, with a few others habituated solely for scientific research. The families consist of at least one silverback along with several females and youngsters.

The park rangers and researchers used to name the mountain gorilla babies to monitor each gorilla in their family and habitat.

In 2005, The Rwandan government began officially naming mountain gorillas in a nationally celebrated event aptly called Kwita Izina; a kinyarwandan word which means “to give name”.

In the last 18 years, Kwita Izina has become a global event to not just name and welcome the new arrivals into the Rwandan mountain gorilla families, but to celebrate the success of conservation efforts in Africa. Over the last fifteen years, more than 350 mountain gorillas have been named. Today, Kwita Izina is part of Rwanda’s strategy to preserve her natural heritage and further expand the role of tourism in the country’s economic transformation.

The ceremony has also proven to be the best opportunity to thank the communities that live around Volcanoes National Park, research partners, veterinarians, dedicated conservationists, rangers, and trackers who protect the gorillas.

The Chief Tourism Officer; Rwanda Development Board, Michaëlla Rugwizangoga echoes this during her welcome address at the naming ceremony:

“We wish to sincerely thank our local community, the rangers, trackers, the vets, researchers and our local and transboundary partners who work tirelessly to make mountain gorilla conservation a success we can truly be proud of.” She said

The CEO of African Wildlife Foundation, Kaddu Sebunya, who not only participated in this year’s naming ceremony but was one of the namers, says “This year’s Kwita Izina is a testament to the commitment to a people-centered approach to conservation.”

Rwanda’s Prime Minister, Édouard Ngirente, who was the event’s guest of honour says: “Our natural ecosystems and national parks represent an important natural and cultural heritage that we hold in trust for future generations. Our key challenge now, and in the future, is to sustain and maintain these natural ecosystems.”

The baby gorilla that Sebunya named is a female baby gorilla, born on September 13, 2021, and the name he gave her was Indatezuka, which means “resilient”. According to him; this name was chosen to highlight the importance of collective responsibility in ensuring successful conservation efforts.

This year, 20 baby gorillas were named. All were born within the past year and, as is the tradition of Kwita Izina, they were named by notable celebrities and conservation icons from around the world.

International Football Referee, Salima Mukansanga, named hers “Kwibohora” meaning ‘Liberation’. According to her, this name was chosen to highlight the role liberation has played in conservation as a foundation of sustainable tourism and development.

His Royal Highness, the Prince of Wales, was also one of the namers this year. Joining the ceremony via video, he named his baby gorilla “Ubwuzuzanye”, meaning ‘Harmony’. He says the name was chosen to raise awareness of the need for humanity to come together as one to protect our environment and achieve sustainable development.

My favourite gorilla baby name was “Ruragendwa”, which means ‘Hospitable’. This name was given to a male gorilla baby by Thomas Millz, the board director, sales and marketing, Volkswagen Group South Africa & Sub-Saharan Africa.

The name represented the welcoming nature of Rwandans, and the famous Rwandan hospitality visitors enjoy when visiting the country.

This is my 8th annual visit to Rwanda and I have indeed been a recipient of the friendliness, hospitality and open nature of the Rwandan people.

Held in Kinigi at the foothills of Volcanoes National Park, in Rwanda’s northern district, Kwita Izina 2022 saw a gathering of friends, family, colleagues, and well-wishers. The atmosphere was festive, joyous and celebratory like all African naming ceremonies. This particular celebration was also special because it is the first time the ceremony had taken place in person since 2019 following the COVID-19 pandemic.

A first-time visitor to the Volcanoes National Park will quickly realise that Kwita Izina is more than a naming ceremony. It is a very vital part of Rwanda’s fast-growing tourism industry.

Rwanda is benefiting from the tourism revenue generated by preserving these mountain gorillas and their habitat. The Rwanda Development Board says Revenue generated from gorilla trekking in Volcanoes National Park amounted to $11 million (approx. Rwf 11 billion) within the first six months of 2022. The money was earned from the sale of 6,200 gorilla permits during that period.

In 2021 and 2020, the park generated $6 million and $5.9 million, respectively, owing to the lockdowns and movement restrictions attributed to the pandemic.

The government also gives 10 percent of the total revenue back to the community, a move which has seen over Rwf7.9 billion (over $8 million) distributed to more than 880 community-based projects.

These include schools, medical facilities, and other key infrastructure projects.

RDB’s statistics say the country’s tourism sector has generated $168 million in revenue in the first six months of this year.

Kwita Izina should show Africans the intrinsic value of conservation and its contribution to the continent’s economic and social prosperity. Preserving our wildlife and deliberate investment in conservation is ultimately for our own benefit and the benefit of future generations.

As Kaddu Sebunya says, Kwita Izina is a personal revelation on the importance of these wildlife species to our national heritage as Africans: that they too are indeed African as much as we are.

Fola Folayan is a Nigerian journalist currently on tour in Rwanda. She writes from Kigali.  Twitter @thefavoredwoman