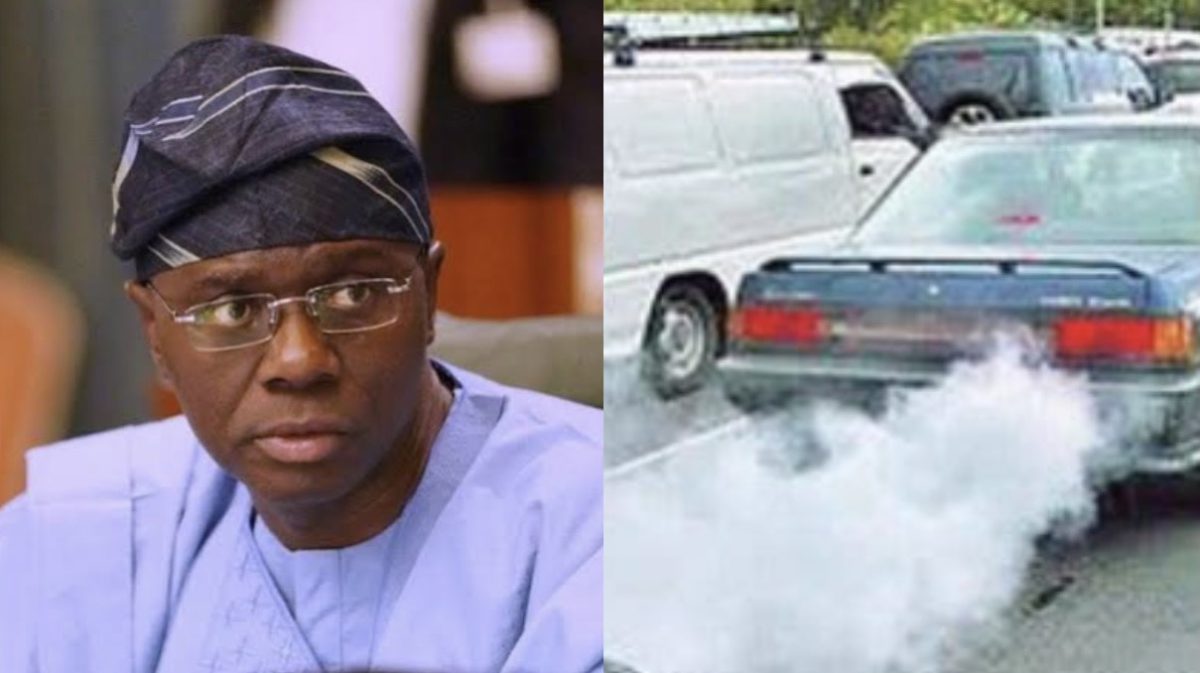 Babajide Sanwo-Olu and smoky vehicle to illustrate the story.

Lagos generates emissions of 26,443,656 tons of carbon dioxide or 1.3 tons per capita, says Taibat Lawanson, a professor of Urban Management and Governance at the University of Lagos (UNILAG).

She called for multisector collaboration to achieve zero carbon emission in Lagos by 2050 to mitigate climate change.

“Lagos state generates emissions of 26,443,656 tons of carbon dioxide or 1.3 tons of carbon dioxide per capita. An estimated 65 per cent of the residents of Lagos who are extremely poor are highly vulnerable to climate impacts,” said Ms Lawanson. “Over 6,500 infrastructure assets, buildings and other features, valued at N73 billion, are classified as highly vulnerable to climate risk.”

She advised the Lagos government to prioritise the protection of the natural environment to reduce carbon footprints and warned against continued dredging – a looming disaster.

She also warned against building on wetlands and other water paths.

“The issues are interlinked, therefore, a multisectoral approach must be adopted,’’ she said.

Ms Lawanson said this at the 2021 World Habitat Day celebration in Alausa tagged ‘Accelerating Urban Action for a Carbon-Free World’.

She added that carbon emission was prevalent in urban centres such as Lagos, with high population density, small landmass, and high commercial and industrial activities.

The university teacher called for proactive measures in accelerating action for a carbon-free state through sustainable measures in transportation, energy, agriculture, and other areas.

She advised the state government to improve waste collection and management methods and transportation and energy infrastructure and set timelines to achieve goals.

Ms Lawanson stated that cities generated about 70 per cent of global carbon dioxide emissions, with transport, buildings, energy, and waste management accounting for the bulk of urban greenhouse emissions.

The don said only 29 years were remaining to achieve targets to reach zero global net-zero emissions set at the Paris Climate Agreement.

Daisi Oso, General Manager of Lagos State Planning and Environmental Planning Monitoring Agency (LASPEMA), said that 90 per cent of open areas in the state had been encroached upon and badly managed.

Mr Oso, among panel discussants, said LASPEMA was already mapping out the encroached areas to construct concrete poles to provide green areas within the right of way.