Thousands of Londoners demonstrated against COVID-19 restrictions and Vaccine passport scheme of the government. 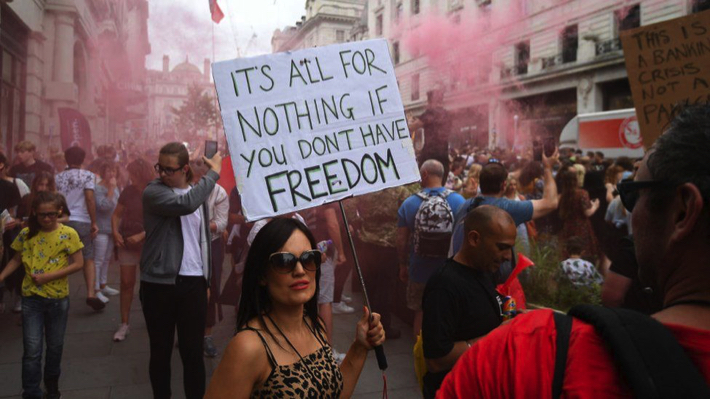 Thousands of protesters in the United Kingdom hit the streets opposing the lockdown and other climate change demonstrations on Saturday.

The protests went on across Westminster, Lambeth and Southwark, with protesters marching down Oxford Street, Regent Street and  Westminster, yelling “shame on you” at Downing Street, lighting flares and waving placards saying “arrest Matt Hancock”,  “the Boris variant”, “no to Covid vaccine” and “no to Covid passport.”

Other protesters left stickers on traffic lights in London and on police vehicles, bearing messages on them saying  “Say no to vaccine passports” and “Vaccine passports will create checkpoint Britain – is this what you want?”

The protests seem to be a mix of multiple demonstrations, as protesters and a DJ in the back of a lorry played music through Central London, with people holding “freedom to dance” placards. This set of protesters were opposing the extension of the lockdown, which would prevent nightclubs from reopening.

Telegraph spoke to Iain McCausland, who said: “The main reason I’m here is because I feel this lockdown has come at the cost of our liberty and rights.

“Our freedom to assemble, our freedom to travel, and work. I’m really quite angry with the government, so are everyone here.”

In the past 24 hours, the UK recorded a 18,270 cases, the highest figure since February 4, and a further 23 deaths. These figures come as the country put out  200,383 first doses and 158,307 second shots were administered since the vaccination rollout.

The protests come while there is growing attention to Health Secretary Matt Hancock’s affair with his aide Gina Coladangelo while England is going through its third lockdown. Mr Hancock was caught on CCTV kissing his adviser Gina Coladangelo. Both are married and have children.

Mr Hancock has admitted to breaking social distancing guidance and had put in his resignation as the health secretary in a letter to the Prime Minister, saying that the government owed “it to people who have sacrificed so much in this pandemic to be honest when we have let them down”.

Mr Hancock has since been replaced with Former chancellor Sajid Javid.

The Metropolitan police were aware of the protests prior to the weekend and had prepared for them. BBC reported that the Metropolitan Police arrested 12 people in raids in three areas on Friday and seized items linked to the protests.