The suspect said he was asked to deliver the weapons to his community in Cross River . 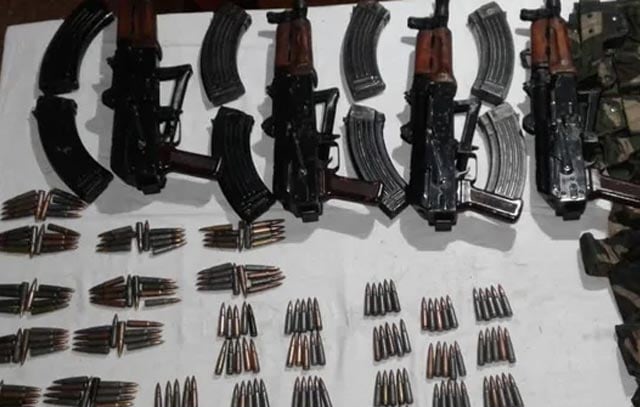 The Borno police command has arrested Clement Asuk, 28, for possessing a cache of arms and ammunition in Maiduguri.

Police spokesman in Borno, Kamilu Muhammed, said on Friday that the suspect was intercepted following credible intelligence at the Kano Motor Park on March 30.

He said that the suspect was heading to Akamkpa Local Government Area in Cross River.

He said four rocket- propelled grenade among others were recovered from him.

Also recovered were one Meinnah 120 drug and charm.

Reacting to his crime, Mr Asuk told reporters that he was given N30,000 as transportation fare from Makurdi to receive the arms from a Lance Corporal simply identified as Samuel, attached to Operation Hadin Kai in Maiduguri.

“Samuel who I knew through my uncle Mr Joshua gave me the arms to deliver to my community in Akamkpa Local Government Area in Cross River, who are currently having communal clashes with members of IPOB (Indigenous People of Biafra).

“The IPOB are attacking the people because of land issue and their not joining the IPOB insurrection.

“The clash has existed for about three to four years now with lives and property lost. The last crisis occurred two months ago where many people were killed.

“I am selling food stuffs and commodities like, rice, beans and pepper. I came here to only receive the items on behalf of my Uncle.

“The police told me that they are working toward ensuring that they arrest Samuel and my uncle.

“I am hoping that they will be arrested because they are the owners of this (these) arms and not me,” he said.