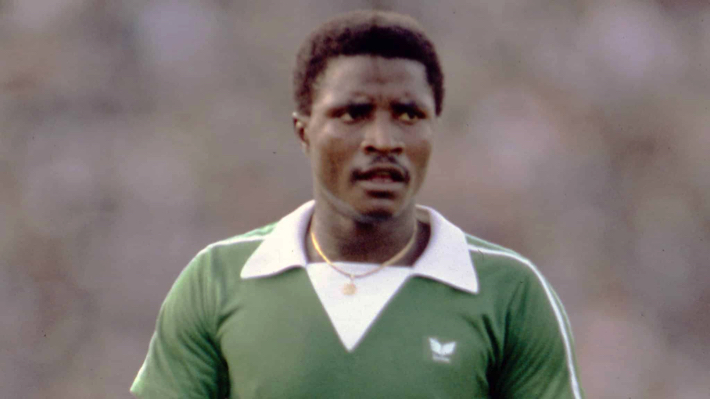 A photo of Muda Lawal used to illustrate the story[Photo credit:Soccernet.ng]

Thirty years after his death, the Nigeria Football Supporters Club (NFSC) has given a posthumous award of patriotism to the late football legend, Mudashiru Lawal.

The spokesperson of the club, Peter Ejiofor, said on Saturday that the presentation of the award to the family of the late midfielder in Abeokuta was part of the activities to mark the 30th remembrance of the football icon.

“The club’s National Chairman, Samuel Ikpea, presented the award to the family when members of NFSC visited to sympathise with the family of Lawal at their Abeokuta residence on Friday during the 30th remembrance of his death.

“In his tribute to the late Green Eagles football legend, Ikpea described Muda as a patriotic and great footballer in his lifetime.

“Muda was a true patriot and great footballer whose service to his nation was unbeaten and legendary.

“Thirty years after, this great footballer’s exploits and artistry on the field of play remains fresh in our memories.

“The NFSC and the teeming fans cannot forget his towering achievements in the field of play during your games.

“May your soul continue to rest in peace,” parts of the statement read.

Mr Ikpea presented the posthumous award to his wife and prayed for the family reminding them that Mr Lawal’s contributions to the game would remain indelible in the annals of Nigerian football.

Also, the National Publicity Secretary of NFSC, Dominic Ehimare, described the late Lawal as a football colossus who bestrode the Nigeria football landscape in his time.

“Muda is a shining example of zeal and dedication in the field of play. He birthed an era that saw to the present football development in Nigeria.

“Although football in his era was not as money-spinning as it is today, he played his heart out for the fun of it to the admiration of all football enthusiasts and supporters.

“May his gentle soul continue to rest in the bosom of his maker, Allah,’’ he said.

Activities that marked Lawal’s 30 years after the pitch started with a Jumat service at the mosque after which the NFSC paid a courtesy visit to the palace of the Alake of Egba land, Oba Adedotun Aremu Gbadebo III.

Later they visited his wife where a posthumous award was presented to his family.

Mudashiru Lawal, popularly known as Muda Lawal, made his debut into the national team in 1975 where he consistently played in the midfield.

He was the first African player to appear in five consecutive African Cup of Nations tournaments from 1976 to 1984.

He held the record of being Nigeria’s most capped player for 25 years, with 86 appearances and 12 goals.

Kanu Kanu equalled it in 2010 with Joseph Yobo and Vincent Enyeama subsequently breaking the record later on 101 appearances.

Mr Lawal, who was described by football lovers as “skilful, tireless, dedicated, and committed, was popularly called the “midfield maestro” and wore a Jersey number 4 shirt for the Eagles for 11 years.

He was immortalised with the Muda Lawal Stadium, Ashero, his hometown in Abeokuta.