Mr Uzodimma received the Torch at the Imo Government House, after being brought into the city by Nigeria’s first Olympic gold medalist, Chioma Ajunwa. 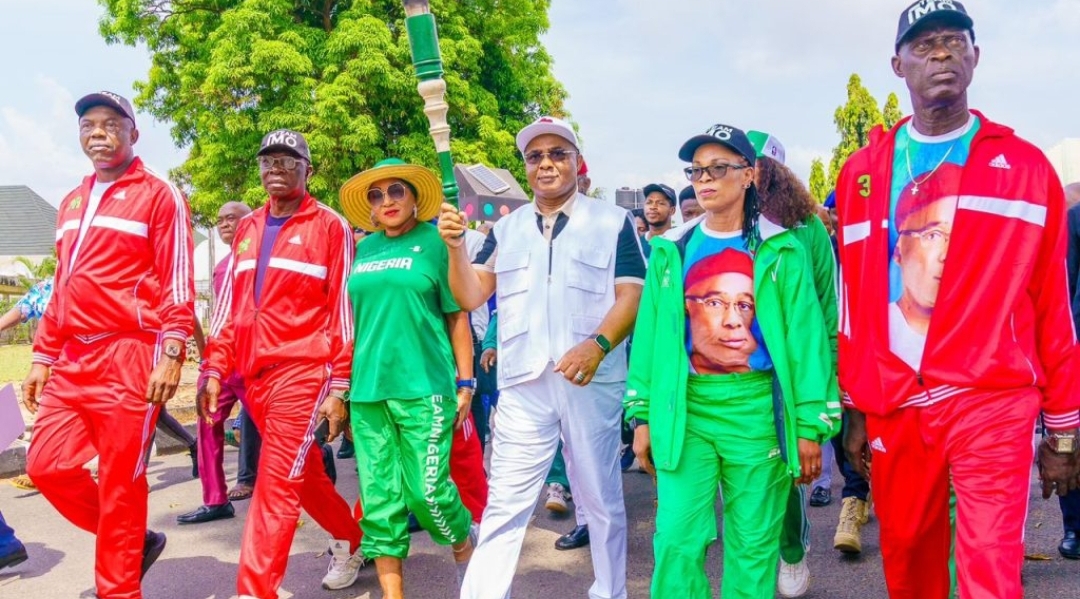 Governor Hope Uzodimma of Imo on Monday in Owerri received the Torch of Unity for the 2022 edition of the National Sports Festival (NSF) which begins November 28 in Delta.

Mr Uzodimma received the Torch at the Imo Government House, after being brought into the city by Nigeria’s first Olympic gold medalist, Chioma Ajunwa.

It was presented to him by the state’s Commissioner for Youth and Sports Development, Emeka Okoronkwo.

During the ceremony, the governor said the NSF was a deliberate policy by the federal government to unite the various sections of Nigeria immediately after the Nigerian Civil War in 1970.

He added that all states of the federation agreed with the policy then.

“All over the world, nothing can unite a nation faster and better than sports. As a signatory to the policy that birthed the National Sports Festival, Imo will not go back,” Mr Uzodimma said.

He recalled that in 2020 the ceremony of receiving the Torch of Unity was one of his first assignments as Governor of Imo.

“It is heart-warming that I am performing the ceremony again in 2022.”

The governor praised Imo athletes for their commendable showing and performance at the 2020 edition of the sports festival, which was held in Benin, and urged them to “do better in Delta.”

He assured that having received the Torch and signed into the programme, his government would give all possible support for the festival to succeed.

Mr Uzodimma urged Imo athletes to adequately prepare themselves for the festival, noting that he could not wait for the day another Imo athlete would beat the records set by Imo-born Ajunwa.

“Sports is something we can get many things from, such as heroes of nations, rich men and women and even best politicians.

“I am waiting to receive so many gold, silver and bronze medals from the participants,” he said.

An official of the Federal Ministry of Youth and Sports Development, Jane Asiofo, on her part disclosed that the Torch started its movement on October 28.

“The team has covered the Northern states before coming into the South-East.”

Ms Asiofo thanked Mr Uzodimma for personally coming to receive the Torch and wished him well.

The highlight of the programme was the governor’s symbolic running with the torch from his office to the entrance to the Government House.

There, he handed it back to the officials for movement to another state in the South-East.

Present at the brief ceremony were the Deputy Governor, Professor Placid Njoku, and Chief of Staff to the Governor, Nnamdi Anyaehie.