Mr Iginla said the sex workers, mainly teenage girls, were rescued in the early hours of Saturday after a tip-off from NAPTIP. 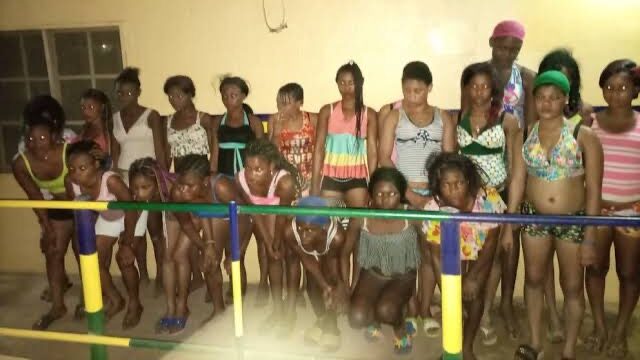 The Nigeria Navy has rescued 50 commercial sex workers and arrested three suspected traffickers during a major raid on two brothels in Port Harcourt.

Richard Iginla, the spokesperson for the Nigerian Navy Ship (NNS) Pathfinder, said the operation was carried out in collaboration with the Nigeria Agency for the Prohibition of Trafficking in Persons (NAPTIP) and Nigeria Security and Civil Defence Corps (NSCDC).

Mr Iginla said the sex workers, mainly teenage girls, were rescued in the early hours of Saturday after a tip-off from NAPTIP.

“We got the intelligence from NAPTIP, who had been tracking the brothels that camped juveniles with some of them as young as 14 years of age.

“No fewer than 50 young girls forced into prostitution were rescued while three recruiters and operators of the brothels were arrested,” he said.

Mr Iginla said the brothels, Royal Brothel and Cool Breeze Brothel, located on the Azikiwe Road in the Diobu area of Port Harcourt, had been shut down.

He said efforts were ongoing to trail and arrest the leaders of the sex trafficking ring, who recruits children from villages into prostitution.

“On conclusion of our investigation, the suspects and victims will be handed over to NAPTIP for further investigation and possible prosecution,” he added.

Speaking, the head of NAPTIP in Rivers, Nwa-amaka Ikediashi, said the agency would immediately rehabilitate the victims to reintegrate them back into the society.

According to her, the victims would also partake in different phases of counselling to ensure they don’t continue prostitution.

An Anambra indigene, one of the rescued minors, said she was trafficked from her village to work as a house help.

“One of my village women (trafficker) brought me and two other girls from our village with the impression that we were coming to serve in a hotel.

“Shortly after we arrived at the hotel, she (trafficker) went outside and collected money from one woman (brothel operator). That was the last time I saw her (trafficker).

“Later, the woman, simply known as madam, put us in a room and told us that we would work as Ashawo (prostitute),” she said.

Ms Ruth said she immediately refused to work as a prostitute, but after the operator threatened her with torture and starvation, she gave in.

“In a day, I sleep with more than 10 men, and whatever money I make, I give it to my madam.

“We hustle by wearing pants to seduce the men. After admiring what they see, they (men) take us into the room, have sex with us and give us money.

“We do a daily account of any money we collect to our madam’s sister, who calculates and gives us our cut,” she recounted.