NDLEA to test all Nigerian students for marijuana, other drugs: Marwa

“We need not be told of the nexus between drug use, crime and criminalities.” 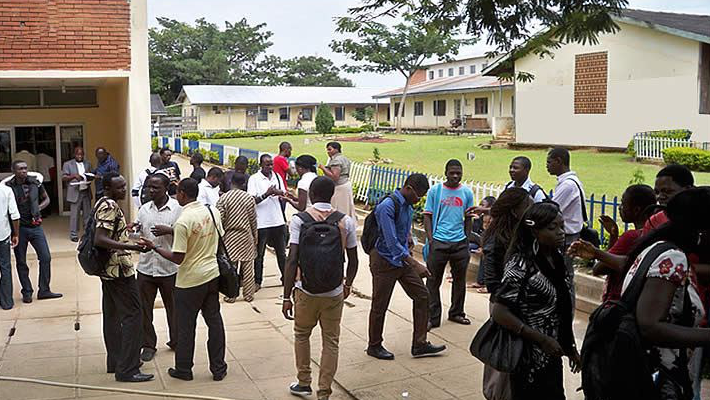 Nigerian students on campus used to illustrate the story

Chairman/CEO of the National Drug Law Enforcement Agency, NDLEA, Gen. Mohammed Buba Marwa, (Retd) has given commanders of the agency in all the states of the federation and special commands marching orders to mop up illicit drugs across the country.

He gave the directive during a meeting with commanders of the 36 states, FCT and special commands on Monday at the agency’s headquarters in Abuja, where he also hinted of plans to seek government’s approval to conduct drug tests on tertiary institutions’ new students, security agencies’ fresh recruits and all newly appointed government employees.

While telling the commanders who briefed him on their posts and areas of responsibility that he’s honoured and proud to serve as Chairman of NDLEA, he said “all commanders must be desirous of keeping drugs out of Nigerian streets and homes, and so all of you must shape up and get all those engaged in the nefarious business to face the music, and I need results from now on. Our maxim will be offensive action. This means we must go all out constantly on the offensive against the bad guys.”

“The success we make of this particular task goes a long way to determine the socio-economic stability of the nation. We need not be told of the nexus between drug use, crime and criminalities. The exponential growth of the nefarious drug activities can be directly linked to the upsurge in crimes such as insurgency, terrorism, kidnapping, cultism, political thuggery, gangsterism, rape and other maladaptation bedeviling today’s Nigeria.

“It is not going to be business as usual. It is a moving train. Please, let nobody stand in its front. The train will crush any such person. To be forewarned is to be forearmed. To the unbending drug crime perpetrators, I would like to let them know also that the game is up! It is high time they embraced another trade. The Federal Government’s policy on agriculture is a window for them to leverage on”, he added.

He said he would put more efforts on drug demand reduction as part of plans to eradicate the scourge in Nigeria. “While strengthening our enforcement activities, we will equally devote a lot of efforts to prevention, treatment and after care and focus on family/parenting, community, school systems, advocacy to all groups through traditional institutions, religious bodies, media, NGOs, CSOs, state and local governments among others. We will rehabilitate our rehab centres, make them functional while more will be built,” he stated.

He said he would soon propose to the government “the necessity for drug tests for all tertiary institutions resuming students, NYSC members, new workers, all security agencies new recruits and random tests for government appointees. NDLEA is ready to help and we must help.”

Gen. Marwa who also expressed his determination to run with the “National Drug Control Master Plan, Our Road Map”, said toll free call centers/ help lines will soon be set up for the use of Nigerians ready to give information or seek intervention from the agency. “Ours is a national assignment. Drugs have littered everywhere; every community. We will lead the fight and we will succeed. Make no mistake about it, it’s a collective effort,” he told the commanders.

While assuring them that their welfare is a priority to him, he said the suspended training of newly recruited personnel would soon resume once appropriate clearance from relevant authorities is secured. “Issues of welfare of staff of the agency of paramount importance and urgency. It will be tackled. I’m aware there are no barracks, which is not conducive for your line and kind of duty. This as well as operational and logistics issues will be looked into,” he assured them.