Vice President Yemi Osinbajo says Nigeria’s current crises reflect the chaos and confusion that he claimed characterised the beginning of God’s creation of heaven and earth. 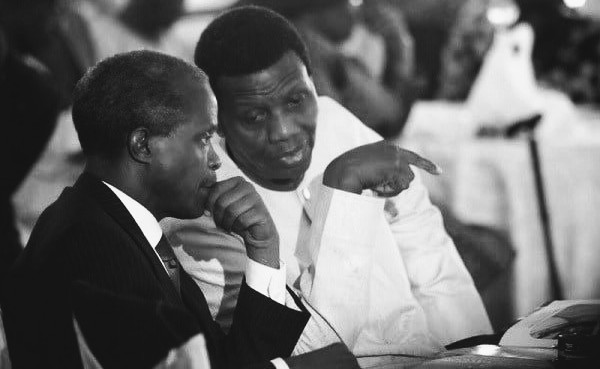 Vice President Yemi Osinbajo says Nigeria’s current crises reflect the chaos and confusion that he claimed characterised the beginning of God’s creation of heaven and earth.

In a statement, Mr Osinbajo’s media aide Laolu Akande said the vice president spoke at the send-off service for Israel Akanji on Sunday.

Mr Akanji served as senior pastor and minister in charge of the First Baptist Church, Garki, Abuja, for 22 years. He is now the new president of the Nigerian Baptist Convention. The president of the Christian Association of Nigeria, Olasupo Ayokunle, and junior health minister Olorunimbe Mamora were present to send him off.

“Indeed, the lives of great men and women, even as the lives of nations teach important lessons. In the beginning, when God created the heavens and the earth, the earth was without form, and void; and darkness was on the face of the deep,” Mr Osinbajo reasoned. “The beginning was bleak, confused, without form, empty. This is the way of the lives of some of the greatest men and women and also nations. There might be confusion, grief, trouble, darkness, and fear.”

Suggesting that creation started amid chaos, Mr Osinbajo added, “But even in that confusion, the Bible tells us that the spirit of the Lord was hovering over the face of the deep. God was in the darkness. He did not run away. He is not asleep.”

He, therefore, urged Nigerians to endure the worsening economic and security crises plaguing Nigerians. “Some things may seem bleak and grave, with insecurity, economic difficulties, but even in the midst of these problems, the spirit of God is in this land. It is here, hovering over this nation,” Mr Osinbajo claimed.

The vice president praised Mr Akanji as a humble and credible leader for promoting peace and unity.

“Akanji now proceeds by the grace of God to the exalted office of the President of the Baptist Convention: the highest office of the Baptist denomination in Nigeria,” he stated. “In this long and arduous journey, Akanji has had by his side, his dear friend, partner, and darling wife, Mrs Victoria Akanji, Mama Sunshine. She has been an effective part of the great works that God has done in her husband’s ministry.”