Their time placed them 10th overall in the event’s two heats. 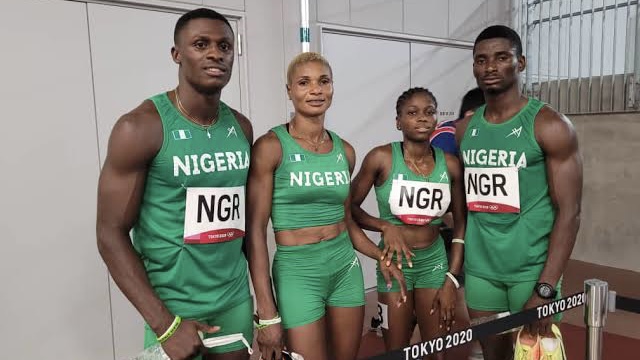 Nigeria’s mixed 4x400m relay team on Friday missed out on progressing into the final of the event at the 2020 Olympic Games in Tokyo.

In the first round of the event which was making its Olympic debut, the team of Samson Nathaniel, Nse Uko, Patience George and Emmanuel Ojeli could only finish fifth.

Running from lane eight in heat one of the event, Team Nigeria however went on to create an African record with their time of 3.13.60.

The race was held amid controversy on the opening day of the Games’ athletics programme.

Poland was to top the timesheets in the event’s two heats after the U.S and Dominican Republic teams were disqualified. But the U.S. mixed relay team, which was initially disqualified over baton exchange, has been reinstated.

But the Nigerian team finished out of a qualification place, with the top three in each heat and the next two fastest advancing to the final.

Their time placed them 10th overall in the event’s two heats.