Nnamdi Kanu’s lawyer said though the detaining authority was giving him medical care, there was still a need to afford him advanced medical care. 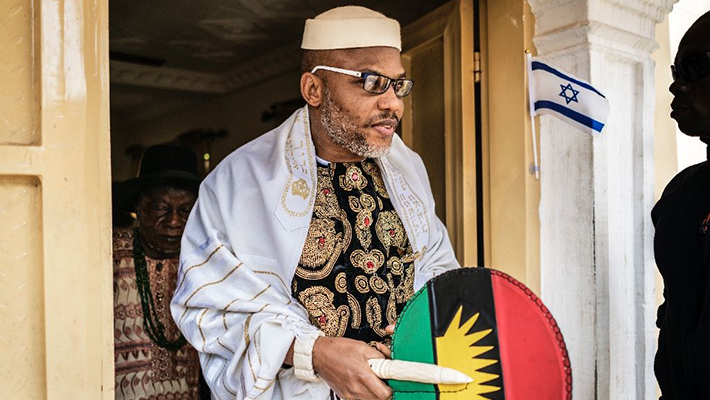 Lead counsel to Nnamdi Kanu, the leader of Independent People of Biafra (IPOB), Ifeanyi Ejiofor, Monday said he has finally been granted access to Mr Kanu and he is in stable condition.

Mr Ejiofor had last week raised an alarm that he was denied access to his client, saying he cannot speak on whether Mr Kanu is in safe condition.

But, in a statement on Monday, Mr Ejiofor said he has been allowed to see Mr Kanu, adding that Mr Kanu is in good condition.

“After weeks of speculations and uncertainties, we have finally seen our client-Mazi Nnamdi Kanu.

We can authoritatively confirm this position to the world, Mr Ejiofor said.

“He is firm and stable, less the burden of solitary confinement and concomitant mental torture arising therefrom,” Mr Ejiofor said.

“Though the Detaining Authority is giving him medical attention but he still requires advanced medical care, which formed substantial part of the relief in our application before the Court.

“He specifically requested that we should extend his heartfelt compliment to millions of his supporters worldwide and all foreign governments and institutions who are relentlessly following up.

Media houses are indeed not left out of this classification, he added.

Mr Kanu was repatriated from Kenya on June 29 to face prosecution. Attorney General Abubakar Malami announced his repatriation back then but failed to explain the circumstances of Mr Kanu’s return to Nigeria.

Though Mr Kanu’s arrest has been widely condemned as a breach of international laws by activists, he was arraigned at the Abuja Division of the Federal High Court, where the court ordered that he be remanded until the continuation of his trial set for July 26.

However, the court adjourned Mr Kanu’s trial to October 21 after SSS failed to produce him in court on July 26.