Mr Mafara said the seizure was made possible by a team of the NSCDC operatives, the Nigerian Army and IPMAN. 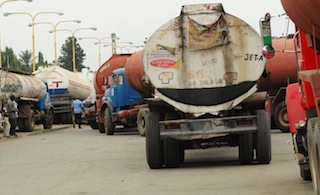 Tankers used to illustrate the story

“We impounded nine trucks containing petroleum products such as AGO, LPFO and crude oil,” said the state commandant, Suleiman Mafara, on Tuesday. “The fight is ongoing, and we will not relent until we rid the state of criminal elements,”

Mr Mafara said the seizure was made possible by a combined team of the NSCDC operatives, the Nigerian Army and the Independent Petroleum Marketers Association of Nigeria (IPMAN).

He explained that the operations lasted between November 12 and 20 at Eket, Ikot Abasi and Etinan local government areas, where the trucks were impounded with the products.

He said some drivers of the trucks ran away on sighting security operatives, and only two were apprehended during the operations.

The commandant applauded the synergy the corps enjoyed with sister security agencies and well-meaning groups such as IPMAN all through the joint operations.

He said the agency was ready and willing to partner with individuals, organisations and groups in the country’s interest.

Mr Marafa warned criminals to desist from sabotaging the mainstay of the nation’s economy, adding that the suspects would be charged to court upon the conclusion of the investigation.