They urged Nigerians to emphasise competence rather than dwelling on religious sentiment ahead of next year’s general elections. 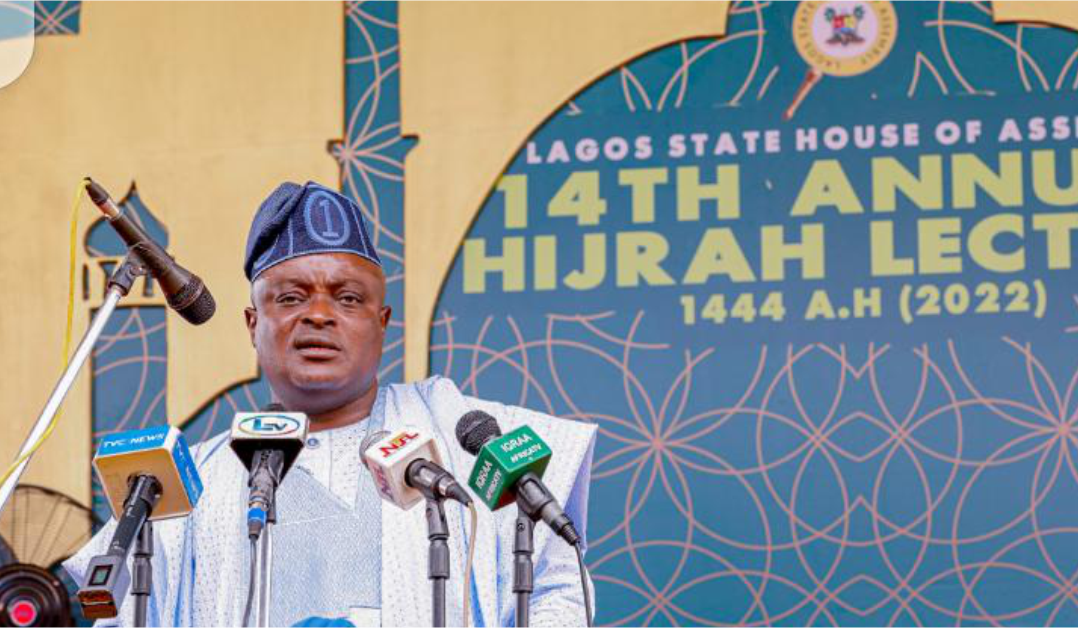 The speaker of Lagos State House of Assembly, Mudashiru Obasa and some Islamic clerics on Wednesday justified the All Progressives Congress’ Muslim-Muslim presidential ticket for the 2023 election.

They urged Nigerians to emphasise competence rather than dwelling on religious sentiment ahead of next year’s general elections.

The Islamic clerics and the speaker were speaking during the 2022 14th annual Hijrah lecture with the theme, “The Role of Religious Bodies in a Democratic State” held at the Assembly complex on Wednesday.

Mr Obasa said the candidates’ good intentions should be considered over and above whether they are running on Muslim-Muslim tickets or Christian-Christian tickets.

“Let us not allow any politician to bamboozle us with religion as a determining factor for who we will choose as our leaders,” Mr Obasa admonished.

The speaker added that the secularity of the Nigerian state was enshrined in its Constitution, and as such, there is no provision for the elevation of a particular form of religion over another, “let alone which one should be in charge of the government. Instead, what we have is freedom of religion.”

The Lagos speaker argued that “religious faith does not determine the success of a given government at whichever level.”

He said: “In countries like India, Singapore, China, and most of the democratic states in Asia and some other parts of the world where neither Islam nor Christianity is being practiced it is gratifying to note that good governance is seen all around them.”

An Islamic cleric, Sheikh Ishaq Mustapha Zughool Sunnusi, who was a guest speaker at the event, said that Islam is about peace, love, compassion, understanding and justice.

Mr Sunnusi, who condemned those opposing the All Progressives Congress (APC) over its Muslim-Muslim ticket, said that Nigerians should avoid provocative statements and promote peace.

He warned that Muslims would always fight for their rights, and condemned some media houses, who he said were promoting disunity over the issue.

Mr Sunnusi claimed that Muslims are more than Christians in Nigeria based on the 1963 population census and 2008 survey.

“We should not consider religion, we should look at the competence of Tinubu and his vice presidential candidate, Kazim Shettima. All Christians should know that they will work for the progress of the country,” he said.

Also speaking, a judge in the Kwara State Sharia Court of Appeal, Justice Abdurraheem Ahmad Sayi, called for uniformity among churches and mosques.

Justice Sayi said that there is no difference between Christians and Muslims, and that God created everybody equally.

“Let us not be arrogant. You must love yourself for what you love for others. We should not use religious media to preach hatred and disaffection.

“Pastors and Imams must lead people to virtue and some lives have not been touched the way they should be touched.

“Prosperity teachings lead to high financial crimes. When religious leaders are after prosperity then there will be no virtues,” he said.

In his lecture, the Chief Imam Offa, Kwara State, Sheik Muyideen Salman Husayu, said that every religious leader is a messenger and that this must be done properly, adding that people could vote for whoever they wanted.

While saying that there is no difference between Islam and Christianity, Mr Husayu stated that what matters is competence.

“Politics is different from religion. Nigerians are one because we are from the source.

“Religion should be separated from nation building. All men of God are the same, so we should help one another.

“It is the duty of the followers to elect the leaders and we should stop saying that politics is a dirty game,” he said.