The pacy English striker brings more fire power to Thomas Tuchel’s side that has endured patches of goal droughts from its forwards. 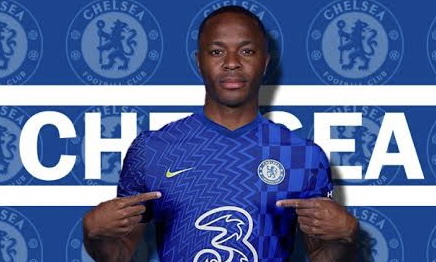 Chelsea have announced the signing of England winger Raheem Sterling on a five-year contract.

Sterling, who penned an emotional farewell message earlier on Thursday, was unveiled in Chelsea jersey via the club’s Twitter page.

The pacy English striker brings more fire power to Thomas Tuchel’s side that has endured patches of goal droughts from its forwards.

Sterling had spent the last seven seasons at Manchester City and has won four EPL titles, five League Cups and one FA Cup.

The 27-year-old made 339 appearances for City in his seven years spell at the Etihad, netting 131 goals and making 74 assists.

He becomes Chelsea’s first signing this season under the new club ownership by a consortium headed by Todd Boehly, an American businessman.

“I’ve obviously achieved a lot in my career so far, but there is still so much more to achieve and I’m really looking forward to doing that in a Chelsea shirt, under Thomas’s management,” Sterling said of his new adventure.

“London is my home and where it all started for me, and it’s amazing I now have the opportunity to play in front of friends and family week in, week out at Stamford Bridge.”

Chelsea co-owner Todd Boehly described Sterling as “a serial winner”, saying “his signing is an important step in strengthening our squad.”