Mr Suleiman Sani, Vice Chairman of the association in Gombe State, said the ban would make its members jobless, increase unemployment and poverty in the country. 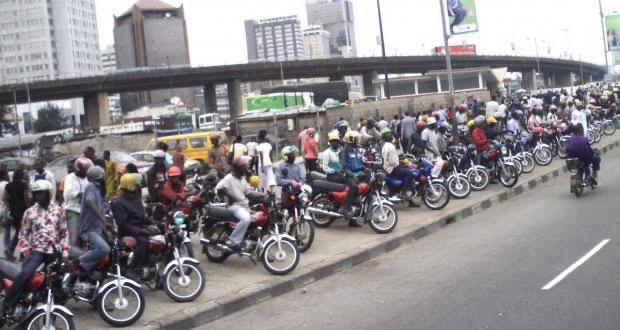 About 80,000 commercial motorcycle riders in Jigawa and Gombe States would be rendered unemployed if the federal government followed up on its proposed ban, the National Commercial Tricycle and Motorcycle Owners and Riders Association of Nigeria (NATCOMORAN), has said.

Mr Suleiman Sani, Vice Chairman of the association in Gombe State, said the ban would make its members jobless, increase unemployment and poverty in the country.

According to him, the ban will create unimaginable hardships to over 66,000 registered members in the state.

“Proscribing commercial motorcycle operators without giving them alternative means of livelihood will create more problems than what we have now.

“They will engage in other activities that might not be beneficial to the society.”

He said those that repair motorcycles and sell spare parts would also be affected, adding that some of the riders hire motorcycles to earn money to fend for their families.

“If the government effected the ban, the riders and their families would not have food to eat.

“For now, there is no sector that can accommodate millions of riders. By implication it might worsen the security situation in the country.

“We have nowhere else to turn to if that happens as government cannot employ everyone.”

In the same vein; Ya’u Muhammad, NATCOMORAN Secretary in Jigawa, disclosed that about 13,000 members of the association would be affected by the proposed motorcyle ban.

He said that thousands of unemployed youths including graduates engaged in commercial motorcycle trade to fend for themselves and their families.

He argued that the ban on motorcycles without alternative measures in place would disrupt transportation services, increase unemployment and social vices.

“In Jigawa; we have over 13,000 members, what about the states across the country,” he said, and urged the Federal Government to rescind its decision.

He said the security challenges bedeviling the country needed a collective approach to tackle, and expressed their readiness to partner with the government to address the problem.

Also, Dalhatu Idris, a motorcycle dealer at Muda Lawal Market in Bauchi, said that the issue of insecurity was beyond motorcycle riding for either personal or commercial purposes.

He said the ban would expose Nigerians to more hardship and escalate the security situation in the country.

A commercial motorcyclist in Gombe, Saidu Yakubu said he had been into the business for nearly 15 years fending for his wife and two children.

“I have been having sleepless nights since the government announced the proposed motorcycle ban. I have no alternative job.

“I dropped out of secondary school, I am saving to go back to school to further my education,” he said.

Another rider, Joshua Bitrus, said the ban would make him vulnerable to poverty.

“During the lockdown, we had a taste of what idleness could lead to, rape, robbery and other crimes increased because the youths are at home and they need to eat.

“We are appealing to the government to have a change of mind and save us the implications of having idle youths in our communities at a time like this,” he said.

Mubarak Dankani, a resident of Damaturu noted that some of the commercial motorcycle riders were literate and educated.

He said that governments lack the capacity to employ them all, hence the need for the state to encourage and empower them.

This, he said would enable them to engage in meaningful activities and contribute to the social and economic development of the country

Similarly, Aminu Bukar, a resident of Bauchi, said motorcycle ban would affect poor people in view of the large-scale disruption of transportation services.

He said that traders, farmers, artisans, students and workers would be forced to trek to their offices, markets, farms and other places.

Furthermore, Baba Isa, said many rural dwellers relied on motorcycles as a major means of transportation.

He said the ban would have a negative impact on their lifestyle, productivity as well as militate against growth of small scale businesses.

For his part, Buba Gadzama, a resident of Maiduguri said the ban would expose rural dwellers to more hardship and worsen the security situation.

He said security agencies should take the fight to the criminals hideouts to end Boko Haram insurgency and banditry in the country.

Caleb Godfrey, a worker in Yola urged the Federal Government not to implement the policy because it would promote crime as many people would be jobless.

“An idle mind is a devil’s workshop,” he said.

He advocated for alternative means of transportation and job opportunities for the youth, to enhance transportation services rather than imposing a ban on motorcycles.