Opeyemi Agbaje: How top contenders stack up in journey to 2023

This electoral cycle will take place within the context of a global health pandemic, insecurity, mass poverty and unemployment afflicting millions. 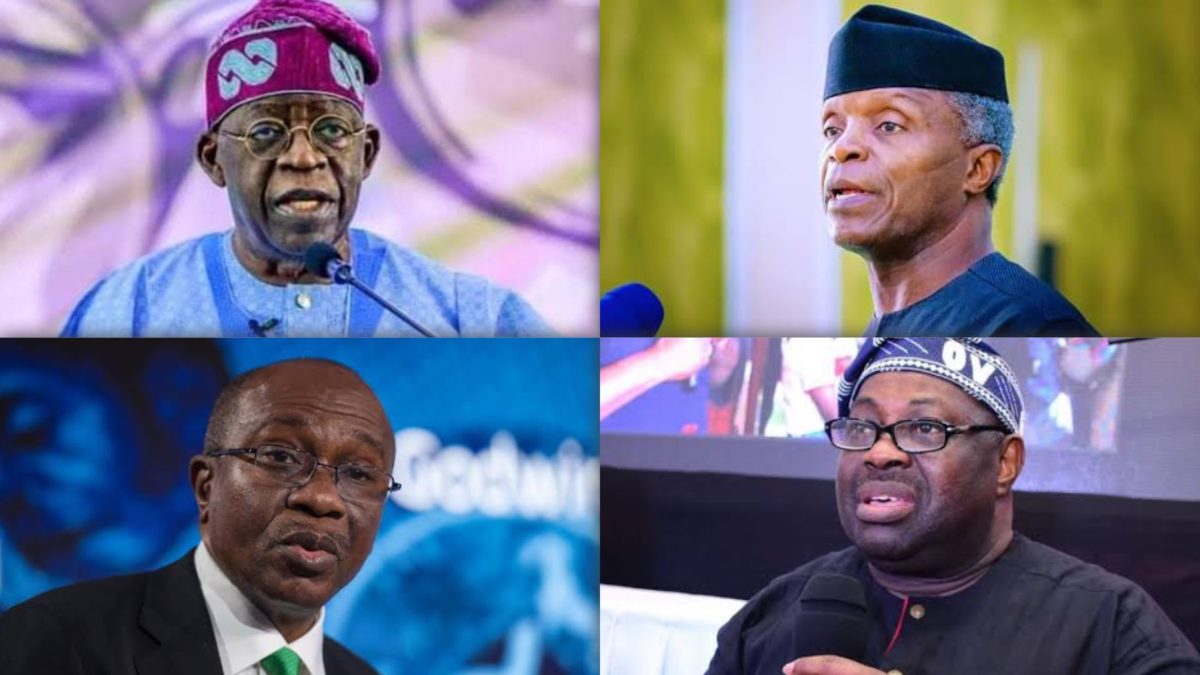 A composite of Tinubu, Osinbajo, Emefiele, Momodu used to illustrate the piece.

On December 10, 2021, I wrote the first in my series as I run an active commentary on the unfolding and evolving political transition towards the 2023 presidential elections. I noted the troubling policy, governance and security context the Buhari regime would be bequeathing to whoever turns out to be his successor and analysed the admittedly evolving field of putative presidents that was already developing.

Adesina’s name increasingly gets mentions these days and there are reports that he is on a purported short-list of former President Olusegun Obasanjo, for whatever that is worth! Some of the other names in the article included former President Goodluck Jonathan who we hear is strangely being promoted by some of those in the Northern APC who superintended his removal from office; Governor Yahaya Bello of Kogi State; former Rivers State Governor Rotimi Amaechi who may also be considered a long-serving super-minister and Governor Dave Umahi of Ebonyi.

There have been significant developments in the two short months since that first instalment was written. Ex-Governor Tinubu made the first move, in effect throwing down the gauntlet, by visiting President Muhammadu Buhari on January 10, 2022 to inform the president of his intention to seek the presidency. Tinubu evidently will not have a funding constraint in his quest and clearly does not have a limitation in terms of motivation, to pursue his “lifelong” desire for Nigeria’s presidency.

In Tinubu’s case, however, the “kokoro to nje efo, inu efo lo wa”(the insect eating away at the vegetable, lies within the vegetable)- the three potent threats to his ambition are all within-the clear or seeming reticence of his ally and beneficiary, Buhari to the prospect of his succession; the increasingly large number of his erstwhile “loyalists” who are either disinterested or actively opposed to his presidential ambition; and reports about his state of health.

Tinubu may have discovered possibly rather late, that true loyalty in the context of politics can only be based on an agreed set of principles, rather than on the benefits that the “leader” may be able to bestow on supposed loyalists. Evidently once those benefits cease or are threatened, any notion of loyalty disappears. Some of those who Tinubu detests and constantly seeks to undermine for their principled inability to promote his leadership (due to an absence of shared principles, values and objectives) may indeed be better “friends” than many of his beneficiaries!

Professor Yemi Osinbajo continues to focus on “strategic positioning” for his yet undeclared aspiration and as we stated in the first article remains a viable aspirant for the presidency. He of course cannot afford to burn his bridges with his former leader, Tinubu as he might yet require the endorsement and support of Tinubu along with his boss, Buhari. There are many others who are engaged in covert strategic positioning-Kayode Fayemi, Ibikunle Amosun and perhaps Babatunde Fashola. I do not write any of them off!

A few new entrants may have joined the fray, whether explicitly or covertly-Central Bank Governor Godwin Emefiele, former Abia State governor and Senate Majority Whip Orji Uzor Kalu and former Imo State Governor Rochas Okorocha being worthy of mention. While there might not be many Nigerians willing to countenance the possibility of an Orji Kalu or Rochas Okorocha presidency, Godwin Emefiele appeared to emerge as the “candidate of the billionaires” for 2023.

Apart from sitting atop huge resources at the Central Bank and having spent almost ten years at the bank, he may be expected to have the support of many members of Nigeria’s super-wealthy clique who have prospered during his tenure. His real challenge will be from the politicians who will find it difficult to accept his political leadership and the Nigerian masses and middle class who may associate his tenure with economic difficulty. Already it appears the 2022 Committee platform which some suspected to be a proxy for his agenda appears to be unravelling after the initial enthusiasm.

The other candidate who may have gained some traction in the last two months is Transportation Minister Rotimi Amaechi who served twice as director-general of Buhari’s presidential campaign. Signalling may be important in (prebendal) politics, and Amaechi’s turbaning as Dan Amanar Daura in Buhari’s hometown may suggest some affinity for his candidacy in circles around Buhari, if not by Buhari himself. The reported visit to him by the First Lady after the turbaning may also have reinforced this signalling especially as the APC presidential selection is shaping up as largely dependent on incumbent endorsement.

As I stated in the first instalment of this series, this electoral cycle will take place within the context of a global health pandemic, worsening insecurity and insurrection, mass poverty and unemployment afflicting millions of hungry and angry Nigerians and increasing sensitivity to divisive ethnic nationalist and religious fault lines in Nigeria, thus increasing risk factors around the transition.

Opeyemi Agbaje is Founder and CEO of leading strategy and business advisory firm, RTC Advisory Services Ltd. He was former Head of Strategy and Entrepreneurship at Lagos Business School and is a lawyer, economic and policy expert and strategist. He is also Chairman of Stairways Communications and Advocacy ltd, a political consultancy.