June 12: Festival of the oppressed requires no approval of a dictator

For every agitator, there’s at least a demand that was either overlooked or underplayed. 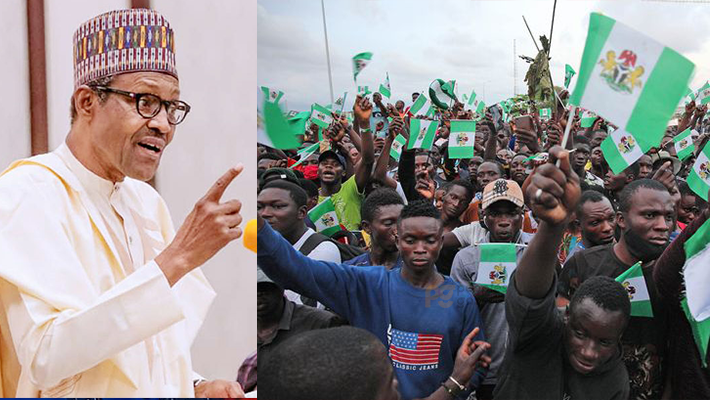 When things go really awful, the Yoruba people would wail the “eku oke bi eku – eye oke bi eye ” dictum; meaning “the rodents and birds no longer sound like they used to.” I consider this as the most appropriate idiom to sum up the situation of things across all sectors in Nigeria under the Buhari-led administration.

If Buhari understands that there’s a specific language to address an apolitical crisis, he should also admit to being addressed in the language that flows with the right decibel his ears can take. For every Nigerian conditioned to live in a dysfunctional country, June 12 is the festival of the oppressed — a time to move out en-mass to show the oppressors the people’s power, the power that has the capacity to consume misrule of any degree.

In the words of Victor Hugo: “No power on earth can stop an idea whose time has come.” There’s a clear proof of self-liberation, the Nigerian people have had it up to their necks and the only way to go out of these shackles is to troop out for a coordinated, peaceful protest against President Buhari’s callousness and sheer cluelessness.

However, when we think we’ve seen enough malady, President Muhammadu Buhari went to show how despotic he is on AriseTV during his live interview, one that was granted when he visited Lagos. He threatened to use the language of force for the Indigenous People of Biafra (IPOB) while he bromances the killer Fulani herdsmen terrorist group terrorising South West and South-Eastern Nigeria.

How do we even find it less offensive to think that the government that has been unsuccessful in decimating insurgents would now chest out its muscle to maim peaceful agitators who have come to the realisation of the overt marginalisation of their people in a country that is managed like the Banana Republic?

For every agitator, there’s at least a demand that was either overlooked or underplayed. If the presidency was sensitive, it would understand that adopting force to silence agitators is the most potent means of grooming peace-loving agitators into becoming cross-border terrorists. If force resolves any internal dispute, we should wonder why we still see the Igbo people agitating for disintegration since the end of the gruesome civil war of 1967 – 1970. After over 51 years of the civil war, the people from the South East and partly South-South region still want to be independent and secede from Nigeria.

In the same interview, the President showed his intended misconception about the EndSars protest while stating that it was a protest staged by the youths to take him out of office. As an unrepentant dictator, President Muhammadu Buhari sees everyone protesting or who had protested as someone who’s on the verge of hijacking power from him.

And I think this shallow thought of the President is enough to understand that the October 20th Lekki Toll-Gate massacre was indeed carried out to wipe out all peaceful protesters who they felt were building up protest to take over power from the same man who aborted democracy to hijack power from a democratically elected president in 1983.

And now that the youths wouldn’t get employed if they don’t behave themselves, I hope the youths speak the language the lazy President (that knows the lazy youths) understands.

We have a country to fix, the protest is a child of necessity and should not be decided upon by the government whose failure inspired this nationwide demonstration to mark Democracy Day under the undemocratic rule of President Muhammadu Buhari. It’s absolutely unbecoming for a pretentious man who rode on the back of social media to wake up one morning only to ban Twitter due to the firm’s policy on warmongering comments from its users.

This is a rescue mission, we must stand strong to fight the large oppressive system. “It’s painful fighting for freedom. Freedom has demands. To begin, we must admit we’re slaves.” Darnell Lamont said. Nigerians have admitted that the country is not working for the larger population and that’s why we see everyone trying to pull out from Nigeria.

Any serious government should understand that good governance is the elixir to the many problems Nigeria is confronted with. If the government provides basic life amenities, causes everything to work well, champions people-centred policies and projects, guarantees safe living condition, gives even opportunities to everyone regardless of tribe, there would be little or nothing the people would agitate over.

Today is the festival of the oppressed. It needs no approval, I maintain. Therefore, General Buhari can deploy the force in his possession.