The governors and some aggrieved party leaders are currently having a strategic meeting in Lagos, which may not be unconnected to the agitation for the removal 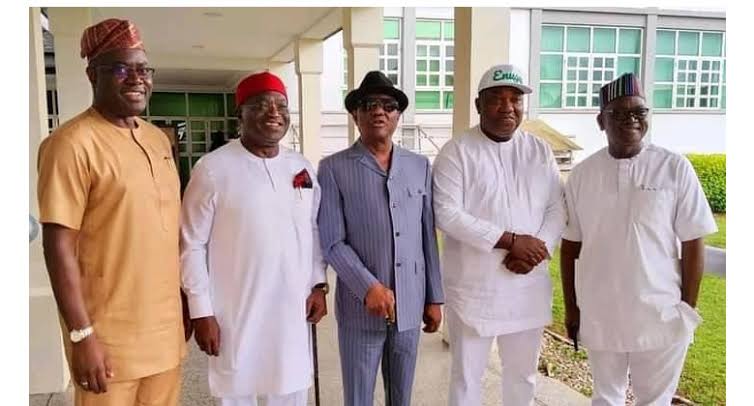 The group is composed of aggrieved party stalwarts and five governors (G5) of the party who are up in arms against the national leadership since the fall out of the presidential primary election in May, where former vice president Atiku Abubakar emerged as presidential candidate.

The G5, led by Rivers governor Nyesom Wike, who came second at the party’s primary, have been clamouring for the resignation of the PDP National Chairman, Dr Iyorchia Ayu, shortly after the party’s presidential ticket was won by a northerner, Atiku Abubakar.

Other governors in the group are Samuel Ortom of Benue, Seyi Makinde of Oyo, Ifeanyi Ugwuanyi of Enugu and Okezie Ikpeazu of Abia.

The governors and some aggrieved party leaders are currently having a strategic meeting in Lagos, which may not be unconnected to the agitation for the removal of Mr Ayu.

Addressing reporters before going into a closed-door meeting, Mr Makinde said the Integrity Group remained the face behind the struggle within the PDP.

“You can see us, five serving governors, as the face of this struggle. Both the leaders and elders of the party that you see here are the people behind those faces.

“We are in the South-West to review the situation within our party, to review where we are and to also look at what is going to happen in the coming elections,” he said.

Mr Makinde noted that at the end of the deliberations, the group would fully brief the media on their stand on all the burning issues within the main opposition party.

“On behalf of our leaders and elders in the south west, I want to welcome members of the Integrity Group and wish us well,” he said.

The party leaders have repeatedly maintained that Mr Ayu must resign for the sake of fairness and justice so as to bring peace to the party.

The aggrieved group maintained the need for the South to produce the party’s national chairman after Mr Abubakar because the party’s presidential flag-bearer for the  2023 general election is from the North.