Guinea Bissau has experienced four coups since independence from Portugal in 1974 and is currently in turmoil. 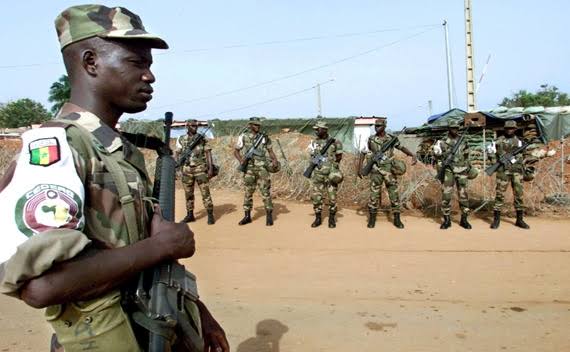 The Nigerian navy shipped military hardware and contingent to Guinea Bissau on Saturday on a peacekeeping mission under the auspices of ECOWAS.

The military wares, including trucks, cars, and tankers, were among the equipment shipped on NNS KADA.

Guinea Bissau has experienced four coups since independence from Portugal in 1974 and is currently in turmoil.

“Nigeria’s effort towards peacekeeping and peace enforcement in Guinea Bissau becomes germane while the Armed Forces of Nigeria’s synergy will become a hallmark as it continues to operate. The role the Nigerian navy is playing today by NNS KADA conveying military hardware is one of the roles assigned to the Nigerian navy constitutionally,” he stated.

Mr Wambai added, “By moving this equipment, we are supporting ECOWAS with the stabilisation support force that is established in Guinea Bissau.”

The FOC also said the movement of the equipment through NNS KADA showed that the Nigerian Navy and the Nigerian Armed Forces had come of age to conduct such operations successfully.

Mr Wambai recalled that in 1990, the navy conducted a similar exercise using NNS AMBE and NNS DAMISA to convey equipment and personnel to help to stabilise Liberia.

The exercise was conducted on the Economic Community of West African States Monitoring Group (ECOMOG) platform. ECOMOG is a West African peacekeeping force that began with approximately 3,000 troops and has grown to between 10,000 and 12,000 troops, the vast majority being Nigerians.