While some are of the opinion that Nigeria’s Independence Day is not worth celebrating, others feel there are still hopes for improvement after 60 years of self-rule. 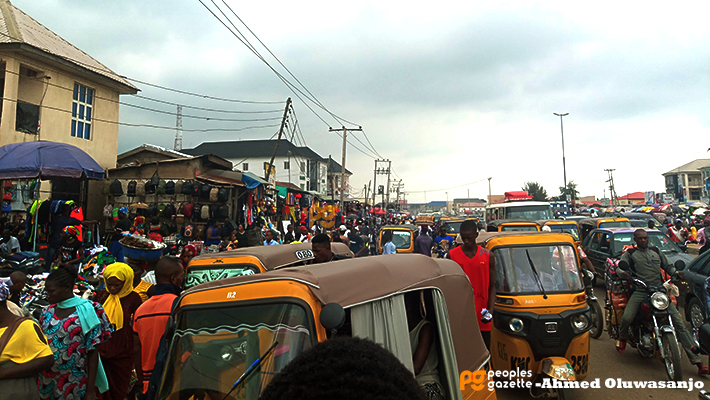 This picture is used to illustrate the story (Photo Credit: Ahmed Oluwasanjo/Peoples Gazette)

As Nigeria marks her Independence Day and 60 years of self-government, Nigerians have begun to reflect on the journey so far while expressing their expectations for the future.

While some are of the opinion that Nigeria at 60 is not worth celebrating, others feel there are still hopes for improvement to better the life of citizens.

Innocent Udiba, a tricycle driver says there is nothing worth celebrating as Nigeria cannot boast of any positive impact the country’s leadership has made on his life.

Mr. Udiba tells Peoples Gazette that there has been insecurity in the country, unemployment and poor road, power, and education infrastructure.

“Nigeria is good, I have the opportunity to stay outside the country but I still choose Nigeria because there are lots of opportunities but you must be clever to grab the opportunity”, another respondent, Blessing Atteh said.

Blessing Atteh a business woman says those in positions are not managing the government as it should be to incorporate the senior citizens and the youth.

Ms. Atteh says as promised by President Buhari to pay the youth, the government should ensure a certain amount is paid to the youth to manage themselves, and also provide free medication for elderly from 60 years and above.

Ms. Atteh accused the government of neglecting civil servants who have used their youthful strength in public service, “when you are weak the government is supposed to bounce back to you and make sure your name is on the list of those that need help”, she says.

Ms. Atteh says pension should be available to all whether civil servants or not to enable the elderly people enjoy the land.

Olayinka Adesoji in Ilesha says her education has stalled because of bad governance, urging the government to prioritise knowledge as a way out of poverty.

“If we want to take Nigeria out of being the poorest country in the world, then our leaders have to focus on education as a way out,” Ms. Adesoji says.

Chimaroke Ibe says Nigeria’s leadership should focus on creating jobs for its teeming masses in order to stem the country’s worsening insecurity.

Umaru Mohammad is a yam seller. He said to better the lives of citizens the government should open the borders for goods to enter the country. The Buhari-administration has closed the country’s land borders since August 2020, blocking commerce with neighbouring Benin Republic and others.

Mr. Mohammed tells the Gazette that the closure has shot up prices of commodities, especially food items.

Victoria Joel, a petty trader, said she is not happy the way goods are expensive, making it difficult for customers to patronize her. She said before, she has been buying garri basin N2,000 now it’s sold for N3,500.

Musa Abubakar in Gusau tells the Gazette he has been blessed by Nigeria’s diversity, therefore her unity should not be compromised by any leader.

“I got my first job through a man from Arochukwu,” Mr. Abubakar says. “And it is still my only job till today.”

“This is why I am using this medium to appeal to our leaders not to diminish the trust that people of all regions have in one another,” Mr. Abubakar says.

The Gazette’s interaction on the streets of Nigeria and examination of online comments show that most Nigerians are not living through this year’s Independence Day and 60th Anniversary in a demoralised mood.

The Gazette observed that in Port Harcourt, traders who had sampled green and white flags, caps and clothes had no buyer as everyone appeared uninterested. It was not always like this.

In recent years, the country has been bedevilled by widespread corruption, injustice, terrorism and ethnic and sectarian strife.

All the crises have combined to leave the country dejected, with hundreds of thousands estimated to have been killed in the last two decades alone. Nigeria is also currently ranked as the entity with the highest population of the world’s poorest people.

Nigeria, the most populous black nation with estimated 200 million people, attained her independence from the British colonial lords on October 1, 1960.

The country has had seven military rulers within its 60 years of independence, but has seen uninterrupted constitutional democracy since 1999.