“So, those Nigerians who refused to return are at risk. Some are in detention centres in Poland, and they are in a traumatic condition.” 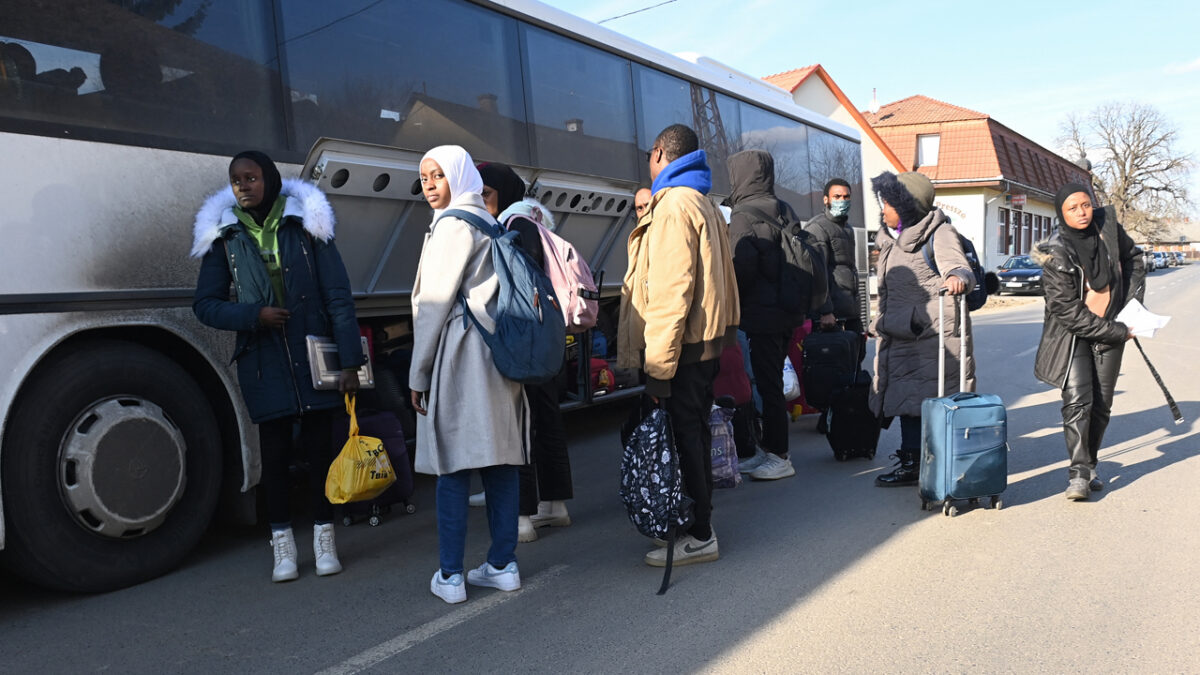 University students, including many from Nigeria, fleeing from the Ukrainian capital Kyiv, stow their luggage as they get on their transport bus close to the Hungarian-Ukrainian border in the village of Tarpa in Hungary on February 28, 2022. – More than half a million people have fled Ukraine since Russia launched its full-scale invasion five days ago, with more than half fleeing into Poland, the United Nations said on February 28, 2022. (Photo by Attila KISBENEDEK / AFP)

The federal government has condemned the Polish authorities for detaining Nigerians and other African students who fled war-torn Ukraine.

The chairman of Nigerians in Diaspora Commission (NiDCOM), Abike Dabiri-Erewa, who disclosed this in Abuja, expressed displeasure over the development.

“Look at what is happening in Poland. Some Africans and Nigerians decided not to return home. Now (the) Polish authority is now going around and capturing blacks and putting them in detention camps,” Ms Dabiri-Erewa disclosed.

She added, “So, those Nigerians who refused to return are at risk. Some are in detention centres in Poland, and they are in a traumatic condition. However, inasmuch as Nigeria has given them the opportunity to come back home and they refused, it does not mean the Polish authority will grab them and put them in detention centres.”

The students’ detention was wrong and traumatic, said Ms Dabiri-Erewa spoke at the commencement of a two-day Psychosocial Trauma Clinic for Ukraine returnees on Thursday.

The clinic was organised by the National Commission for Refugees, Migrants and Internally Displaced Persons, NiDCOM and Project Victory Call (PVC) Initiative, Naija.

According to Ms Dabiri-Erewa, some Nigerian students who fled war-torn Ukraine to Poland and Hungary were now in detention in Poland. A development she said was unacceptable to the Nigerian government.

“The federal government is now calling on the Poland authority to release the blacks in their custody. It is not right for them to detain the blacks because they decided to take cover in their country,” she pointed out. “They are not putting whites in those detention centres. So, send them back to their countries instead of capturing them in detention centres which is the height of racism in a war situation.”