Portugal defeated the Nigerian Super Eagles 4-0 on Thursday in a friendly match. 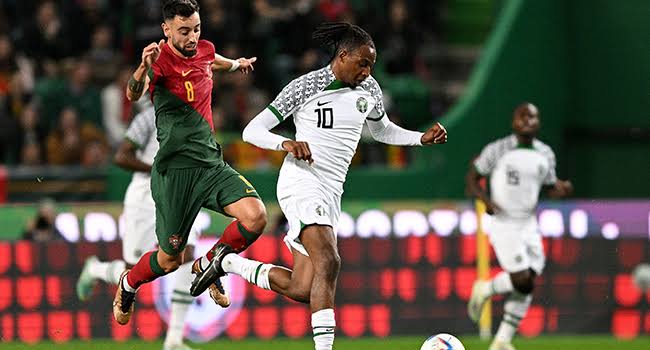 Portugal defeated the Nigerian Super Eagles 4-0 on Thursday in a friendly match as part of their warm-up ahead of the Qatar World Cup.

The Portuguese are competing in Group H against Ghana, Uruguay and South Korea.

The match played at the José Alvalade stadium in Lisbon saw Nigeria outmatched as they were repeatedly split open by the Euro 2016 champions, handing Jose Peseiro a bitter return to his homeland.

After just nine minutes of play, Portugal took the lead, thanks to the tremendous attacking prowess of Bruno Fernandes, Andre Silva, Joao Felix, and Bernardo Silva.

With a quick slalom run that brought him to the byline, Diogo Dalot attacked the Nigerian defence. The Eagles’ defenders gave him enough time to find Fernandes on the edge of the box, where he slid the ball past Francis Uzoho.

The Portuguese team kept control of the game and created plenty of opportunities, so it was not unexpected when they scored their second goal.

A cross from Bernardo bounced off Eagles rookie Bright Osayi-Samuel’s arm. Fernandes kicked the subsequent penalty kick into the bottom corner after the referee pointed to the penalty spot.

Up until the introduction of Samuel Chukwueze and Paul Onuachu following halftime, Nigeria remained silent.

Osayi-Samuel corrected his earlier error and earned a penalty for Nigeria, but the Eagles were unable to take advantage with Dennis Emmanuel failing to convert.

After that, Portugal regained control of the match and sealed the victory with two goals from Gonçalo Ramos and Jaoa Mario.

As a result, Peseiro has now lost four out of his last seven matches in charge of Nigeria. Algeria, Mexico, and Ecuador were the first three opponents that the team lost to.