The recapture of Lyman forced a close ally of Russian President Vladimir Putin to call for the possible use of low-grade nuclear weapons. 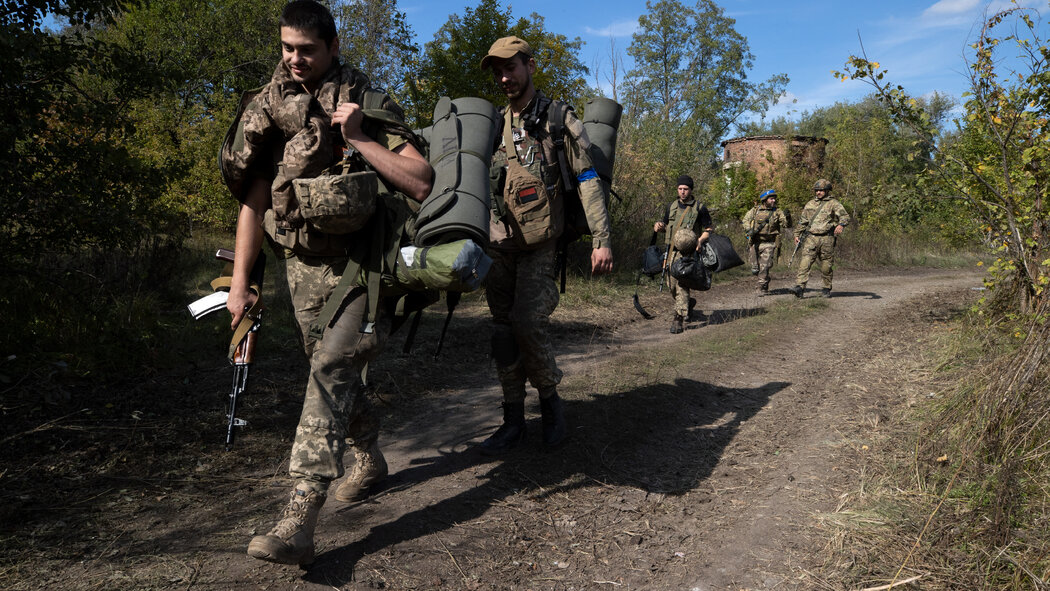 Ukrainian troops said they had retaken the key bastion of Lyman in occupied eastern Ukraine, a stinging defeat that prompted a close ally of Russian President Vladimir Putin to call for the possible use of low-grade nuclear weapons.

The capture came just a day after Mr Putin proclaimed the annexation of four Ukrainian regions – including Donetsk, where Lyman is located – and placed them under Russia’s nuclear umbrella, at a ceremony that was condemned by Kyiv and the West as an illegitimate farce.

The Ukrainian soldiers made the claim in a video that was recorded outside the town council building in the centre of Lyman and posted on social media by Kyrylo Tymoshenko, deputy head of President Volodymyr Zelensky’s office.

“Dear Ukrainians – today the armed forces of Ukraine … liberated and took control of the settlement of Lyman, Donetsk region,” one of the soldiers says.

At the end of the video, a group of Ukrainian soldiers threw Russian flags down from the building’s roof and raised a Ukrainian flag in their place.

Hours earlier Russia’s defence ministry had announced it was pulling troops out of the area “in connection with the creation of a threat of encirclement”.

Russia had used Lyman as a logistics and transport hub for its operations in the north of the Donetsk region.

Its capture is Ukraine’s biggest battlefield gain since a lightning counteroffensive in the northeastern Kharkiv region last month.

President Zelensky promised more quick successes in the Donbas, which covers the Donetsk and Luhansk regions that are largely under Russian control.

“Over the past week, the number of Ukrainian flags in Donbas has increased. There will be even more a week’s time,” he said in an evening video address.

He also indicated Ukrainian troops had taken the village of Torske, on the main road out of Lyman to the east.

The recent successes have infuriated allies of Mr Putin such as Ramzan Kadyrov, the leader of Russia’s southern Chechnya region, who said he felt compelled to speak out.

“In my personal opinion, more drastic measures should be taken, right up to the declaration of martial law in the border areas and the use of low-yield nuclear weapons,” Mr Kadyrov wrote on Telegram before Mr Zelensky spoke.

Other top officials, including former president Dmitry Medvedev, have suggested Russia may need to resort to nuclear weapons, but Mr Kadyrov’s call was the most urgent and explicit.

Mr Putin said last week that he was not bluffing when he said he was prepared to defend Russia’s “territorial integrity” with all available means, and on Friday made clear this extended to the new regions claimed by Moscow.

Washington says it would respond decisively to any use of nuclear weapons.

Serhii Cherevatyi, spokesperson for Ukraine’s eastern forces, said before the capture that Russia had 5,000 to 5,500 troops at Lyman but the number encircled could be lower.

Neither side’s battlefield assertions could be independently verified.

Mr Kadyrov said Colonel-General Alexander Lapin, the commander overseeing Lyman, was a “mediocrity” who should be stripped of his medals and sent to the front. He said he had warned army chief General Valery Gerasimov of a looming disaster.

“The general assured me he had no doubts about Lapin’s talent for leadership and did not think a retreat was possible,” he said.

Ukraine says taking Lyman will allow it to advance into the Luhansk region, whose full capture Moscow announced in early July after weeks of grinding advances.

“Lyman is important because it is the next step towards the liberation of the Ukrainian Donbas.

“It is an opportunity to go further to Kreminna and Sievierodonetsk, and it is psychologically very important,” Mr Cherevatyi said.

The Donbas has been a major focus for Russia since soon after the start of Moscow’s invasion on Feb. 24 in what it called a “special military operation” to demilitarise its neighbour.

Mr Putin proclaimed the Donbas regions of Donetsk and Luhansk and the southern regions of Kherson and Zaporizhzhia to be Russian land on Friday – a swathe of territory equal to about 18 per cent of Ukraine’s total surface land area.

Ukraine and its Western allies branded Russia’s move as illegal and Kyiv vowed to continue liberating its land of Russian forces and said it would not hold peace talks with Moscow while Mr Putin remained president.

Mykhailo Podolyak, an advisor to President Zelensky mocked the Kremlin ceremony on Friday announcing the annexation.

“Now Russian troops are leaving another strategic city and propagandists are looking for culprits. Reality can hurt if you live in fantasy world,” Mr Podolyak wrote on Twitter.

“This puts in bright lights that his claim is illegitimate and cannot be enforced,” he said.