Saudi Arabia came from behind to stun Argentina 2-1 in the opening match of Group C, ending the Albiceleste’s 36-match unbeaten run in dramatic fashion. 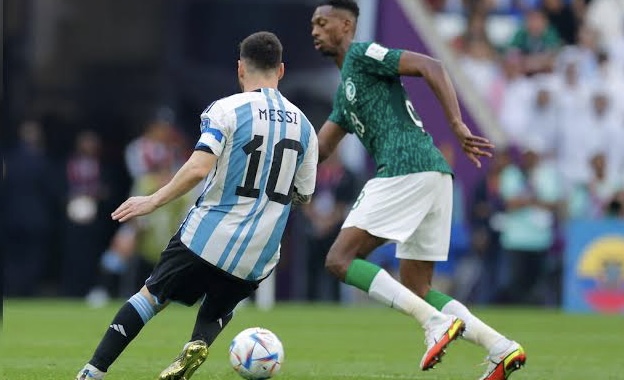 Saudi Arabia produced one of the biggest upsets in World Cup history, as they came from behind to stun Argentina 2-1 in the opening match of Group C, ending the Albiceleste’s 36-match unbeaten run in dramatic fashion.

The Saudis have been defensively sound since Hervé Renard took over in 2019, so the Frenchman would have been disappointed that a lack of discipline was at the heart of the solitary goal his side conceded in the first half.

Just seven minutes were on the clock when Leandro Paredes tumbled to the floor after attempting to win a header from a corner, with a VAR check showing Saud Abdulhamid had wrestled him to the ground. Lionel Messi smoothly dispatched the penalty into the corner, to become the first Argentinian player to score at four different World Cups.

The remainder of the first half was a tactical battle between Argentina’s marauding forwards and Saudi Arabia’s risky-yet-effective defensive high line. The Albiceleste would find the net three more times, but on each occasion they were caught out by the Falcons offside trap, with Messi being its first victim before Lautaro Martínez twice had his celebrations cut short by a VAR check.

A rowdy Saudi following in the stands had made the short journey over the border, and they were sent to dreamland after a quickfire double from their bullish team who took to the field confidently after the interval.

On the 48-minute mark, Saleh Al Shehri produced a neat finish from a wide angle to equalise, and just four minutes later the Green Falcons were flying high in stunning fashion. The ball fell kindly to Salem Al Dawsari, and the Al-Hilal midfielder fired in an unstoppable curling strike beyond Emiliano Martínez.

Despite there being plenty of time for an Argentine fightback, Lionel Scaloni’s men were flustered and erratic in their attempts to grab an equaliser and were often being thwarted by either goalkeeper Mohammed Al Owais or heroic tackles that were celebrated by fans and players alike.

Ultimately, not even eight minutes of additional time could offer Argentina redemption, and Saudi Arabia can now dream of advancing beyond a World Cup group stage for the first time since 1994.