“It was a deserved defeat. We weren’t good today. We didn’t defend well and lost too many balls,” Bayern Munich coach Julian Nagelsmann said. 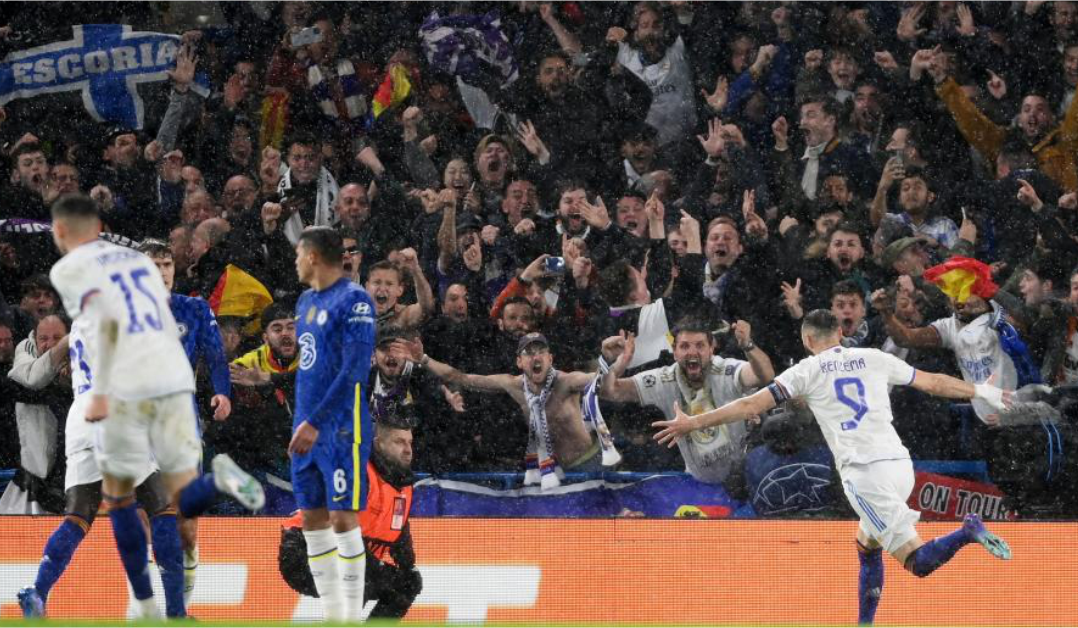 He completed his treble seconds after the restart due to goalkeeper Edouard Mendy’s terrible blunder.

Benzema had also scored a hat-trick in the previous game Real Madrid won with the same 3-1 scoreline against Paris Saint-Germain (PSG) in the last 16.

Kai Havertz was on target shortly before half-time for the Blues, who eliminated Real Madrid in last year’s semi-finals.

They now face an uphill battle next week at the Bernabéu.

“They’re magic nights, like the other day at the Bernabéu against PSG. Today (Wednesday), we came out to win, to show we’re Real Madrid,” Benzema later said.

There was more joy for Spain as Europa League winners Villarreal beat harmless Bayern Munich 1-0 with the goal from Arnaut Danjuma’s early strike.

It was their next upset bid following a last 16 elimination of Juventus.

The other two first-leg games were played on Tuesday, with Liverpool well placed, winning 3-1 at Benfica while Manchester City edged Atletico Madrid 1-0.

Former Chelsea manager Carlo Ancelotti tested negative just in time to make it to Stamford Bridge after a coronavirus infection at the helm of Real Madrid.

He then saw the unmarked Benzema head the opening goal in the 21st minute off a cross from Vinicius Junior, who had hit the top of the bar earlier.

The goal rattled the Blues, who had crashed 4-1 at the weekend against Brentford. Three minutes later, Benzema wrong-footed Mendy by artistically heading Luka Modric’s cross into the far corner.

Havertz revived Chelsea’s hopes in the 40th minute when he headed in Jorginho’s chipped ball over the Real Madrid defence.

But Chelsea’s comeback attempt stalled seconds after the restart when Mendy made a mess out of a routine pass to Antonio Rüdiger. It left Benzema with an easy shot into the empty net for his 11th goal of the competition.

Romelo Lukaku came on only to head wide from a perfect position in the culmination of Chelsea’s woes.

“It is a heavy loss. It was one of the worst first halves that I saw from us here at Stamford Bridge,” Chelsea manager Thomas Tuchel later said. “If we keep playing like this … we will get hammered at Bernabeu.”

In Villarreal, Bayern Munich left-back Alphonso Davies played his first game of the year after heart issues, but it was the hosts who drew first blood after eight minutes.

That was when Danjuma fired in a low shot to complete a slick move on the right wing with his sixth goal of the campaign.

Bayern Munich were out of sorts but lucky because Francis Coquelin was ruled offside before his seemingly attempted cross went in.

Also, Gerard Moreno was denied by the left post, and he then missed the empty net from his own half after a mistake from goalkeeper Manuel Neuer.

“It was a deserved defeat. We weren’t good today. We didn’t defend well and lost too many balls,” Bayern Munich coach Julian Nagelsmann said.