Two security operatives and a resident were said to have been killed in the incident. 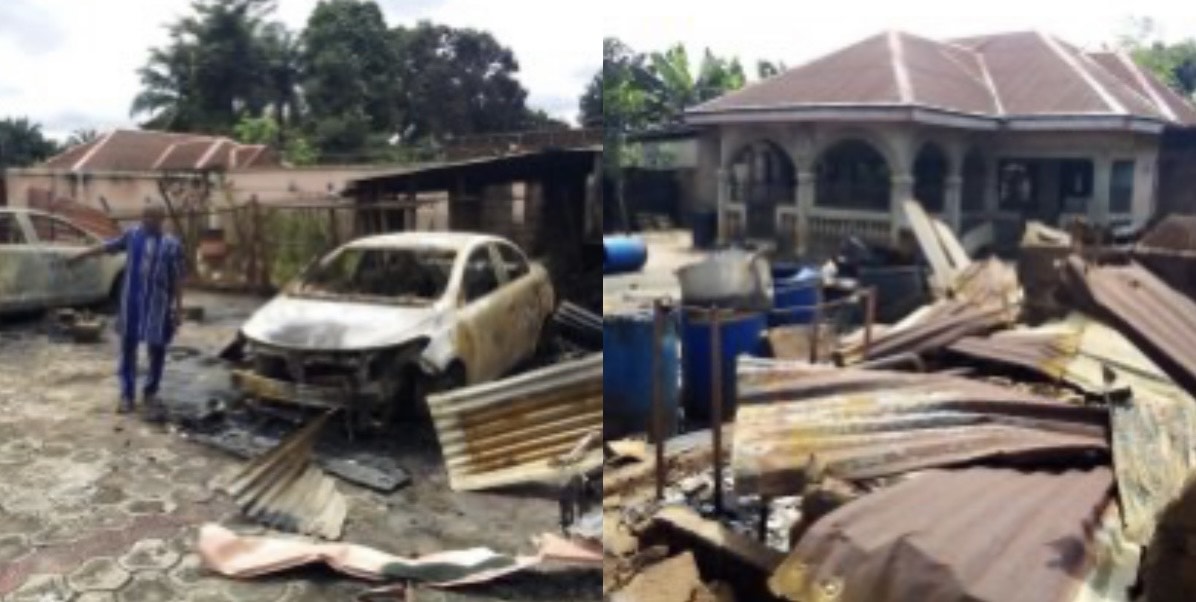 An army raid on illegal oil bunkerers at Izombe community in Oguta Local Government Area of Imo on Friday has left many residents homeless as over 70 houses were razed and properties worth millions of naira were destroyed.

Some victims described the military operation as “unwarranted” while lamenting the huge losses incurred in the raid.

Two security operatives and a resident were said to have been killed in the raid while more than 70 houses were razed following a squabble between youths who were collecting tolls from illegal oil bunkerers in the community.

A NAN correspondent who visited the area on Sunday reports that some victims were seen standing helplessly in their buildings destroyed beyond repair.

Speaking on the incident, the traditional ruler of Aborsi-Izombe, Eze Pius Muforo, said the government should thoroughly investigate the main cause of the incident.

“I gathered that one youth and two security operatives were killed.

“It is very condemnable that human lives were lost in the incident and I sincerely sympathise with the families of the deceased,” he said.

According to him, his house was spared but that the houses of his subjects were badly affected.

The traditional ruler lamented that more than 70 houses, 15 vehicles and 25 motorcycles were razed just as crops were destroyed.

“This community has been peaceful. We don’t deserve the punishment meted to us. The victims never took part in illegal oil bunkering business,” the traditional ruler said.

He also expressed concern over increasing illegal oil bunkering in the area and urged the government to find urgent ways of stopping the activity in the area.

He also appealed to the government to find ways to meaningfully engage the teeming youths in the area to deter them from nefarious activity.

A victim, Ifeanyichukwu Onyeukwu, who described the incident as a “tragedy,” said the community had never experienced such an attack.

“It was like a war situation. They came here with about 30 Toyota Hilux vans and three war tanks. I hid in the bush watching from a distance how they destroyed our buildings.

“We lost everything including clothes, phones, electrical appliances and money.

“My cousin lost more than N500,000 cash while his wife also lost some money belonging to a church group to which she belongs.

“I am not part of the illegal bunkering business going on in the area, but I am surprised that the problem caused by few individuals affected me and virtually everyone in the village,” he said.

Mr Onyeukwu urged the governor of Imo to visit the area to ascertain the level of damage caused and assist the victims.

A retired driver of the Court of Appeal, Victus Nwadikwa, said he and his brothers lost three cars and two buildings to the attack.

“On Friday morning, I left my home to Mbaise. I later received calls that there was trouble at Izombe and I should not return home.

“I returned on Saturday to discover that the three cars in my compound had been burnt. My house and that of my brothers have been burnt as well.

“We couldn’t save anything from the houses. Now, all my sweat over the years have been turned to rubble,” he lamented.

Mr Nwadikwa, who said since retirement he relied on his pension and sales from his farm produce, also appealed to the government to assist victims.

When contacted, the army spokesperson at 34 Artillery Brigade, Obinze, near Owerri, declined comments.

Also contacted, the spokesman of the police in Imo, Mike Abattam, merely directed NAN to the army public relations office.

“My advice is that you meet the military public relations officer. He will give you more information about that,” Mr Abattam said.