Mr Buhari had spent most of the week trying to outwit APC governors in handpicking a consensus presidential candidate. He did not succeed. 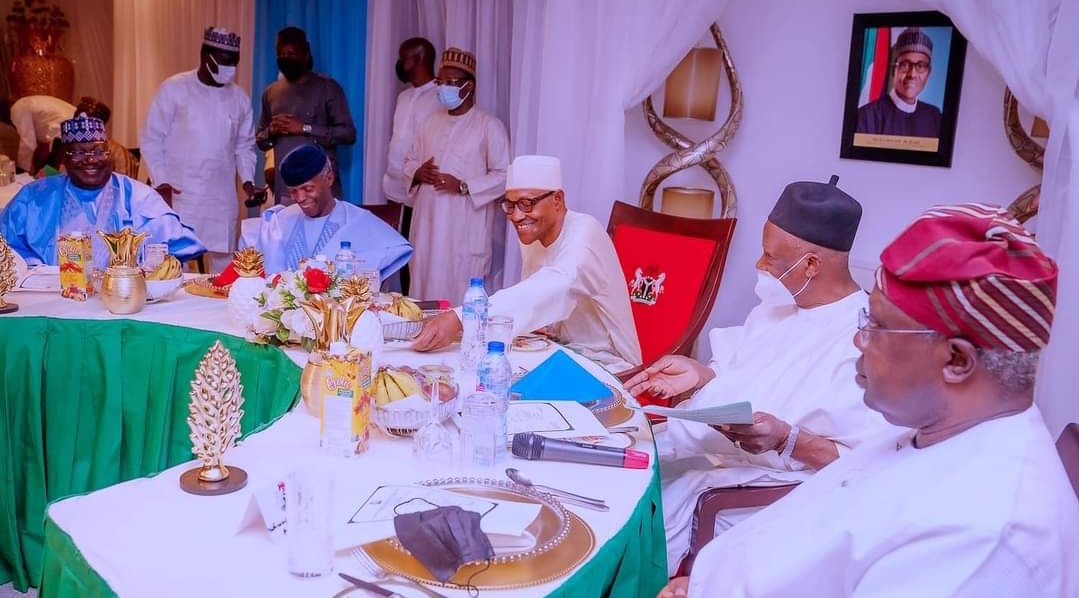 President Muhammadu Buhari in the course of the week appraised the series of consultations held so far towards getting a widely acceptable presidential flag bearer for the governing All Progressives Congress (APC).

Mr Buhari, who met with members of the National Advisory Council of the APC on June 5, predicted a successful party’s convention at the Eagle Square between June 7 and 8.

“We are on the way towards winning our third straight victory since 2015,” said the president at the meeting with members of the council.

Mr Buhari also met behind closed doors with northern governors elected on the platform of APC at the State House in Abuja, on June 6.

His media aide Garba Shehu confirmed in a statement that Mr Buhari again cleared all doubts about his stand on the choice of a presidential candidate for the governing APC.

The statement quoted the president as insisting that he had “anointed no one.” However, Mr Buhari had attempted to foist a presidential candidate on the party, in his public request for “reciprocity” from the party’s governors. His call to choose a consensus was turned down.

Mr Buhari said he had a clear mind about what he was doing and asked the APC governors to feel the same way.

On May 31, Mr Buhari infamously told the governors to support his anointed presidential aspirants. The governors did not listen to him. That call had infuriated ex-Lagos Governor Bola Tinubu, who eventually won the APC presidential ticket, forcing him to go on a tirade against Mr Buhari’s efforts to thwart his lifelong ambition. Mr Tinubu later recanted.

On June 7, Governor Yahaya Bello of Kogi and presidential aspirant of APC then, had met with the president and disassociated himself from the party’s consensus plan.

Mr Buhari, who addressed the convention on June 8, urged members of the APC to remain united and avoid acrimony.

He also enjoined delegates at the special convention to consider voting the presidential candidate with the best chances of securing victory in the 2023 general elections.

He explained that the leadership of the party must continue to forge the unity of purpose among party members and to keep securing needed compromises in the interest of the party.

On the same day, the president presented the APC victory flag to Mr Tinubu, who emerged winner of the party’s presidential primary election.

The delegates of the APC at the convention elected the former Lagos governor as APC presidential flag bearer for the 2023 presidential election.

“Having emerged victorious he has our full and unwavering support,” declared the president who had not shown his preference for Mr Tinubu until the latter clinched the presidential ticket.

Similarly, the president on June 9, described the just-concluded presidential primary of the APC as one of the most competitive and peaceful in the history of Nigeria’s democracy.

Mr Buhari stated this in a letter addressed to Governor Atiku Bagudu of Kebbi. Mr Bagudu is also the chairman of the Progressives Governors Forum.

The president commended the role played by Mr Bagudu in the success of the presidential primary that produced the party’s presidential candidate for the 2023 general elections.

On June 9, the Nigerian leader hosted the outgoing ambassador of South Sudan to Nigeria, Paul Molong, who paid him a farewell visit at the State House. Mr Buhari expressed satisfaction over the cordial relations between Nigeria and South Sudan.

Also on Thursday night, Mr Buhari hosted the APC presidential flag bearer, who was on a thank-you visit to the State House, Abuja.

Speaking to State House correspondents after the meeting, Mr Tinubu pledged to sustain Mr Buhari’s legacies when he wins the election and is sworn in as his successor.

He commended the president for providing a level-playing field for the process of selecting the party’s presidential candidate.

The president concluded his official engagements for the week on Friday with the inauguration of the Presidential Council on Digital Economy and e-Government, promising that his regime will continue to take advantage of digital technologies to transform every sector of the economy.

He directed the Minister of Communications and Digital Economy, Isa Pantami, to chair the council on his behalf and give regular updates.

He tasked members of the council to work towards further strengthening the capacity of government to develop, adopt and deploy digital technologies to make government more efficient and transparent, thereby improving Nigeria’s global standing in the ease of doing business index.