The Qataris are highly averse to bad publicity like homeless visitors or empty World Cup stadiums. They’re sure to find solutions to the shortfall in rooms. 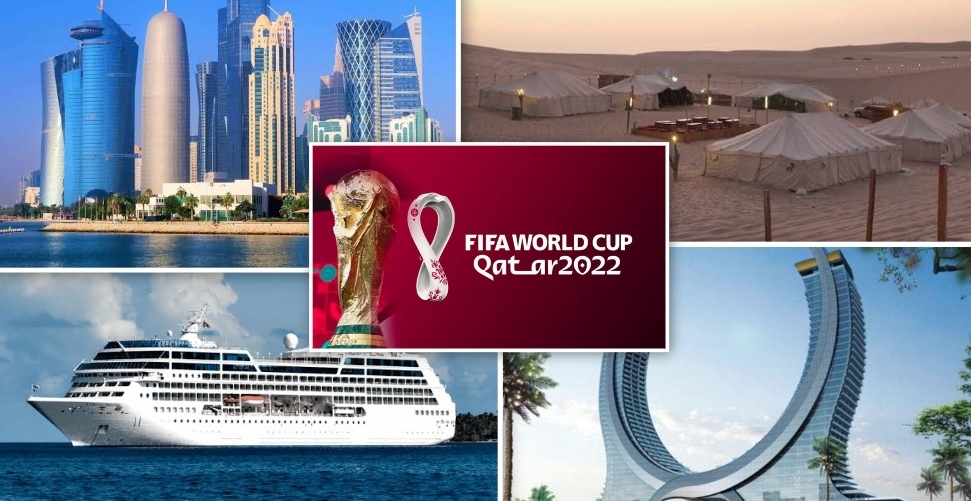 No fewer than 850,000 visitors, including fans, officials and the media, are expected in Qatar during the month-long FIFA World Cup starting on November 20, per projections from previous editions of the global football summit. The expected inflow, however, poses a dimension of challenge for the tiny Persian peninsula.

In our continuing series leading up to Qatar 2022, Peoples Gazette examines accommodation challenges that travellers may face at the mundial and efforts in place to countermand them.

In late 2021, a pre-tournament search by Associated Press among all the leading hotel chains in Qatar and aggregated sites for accommodation during the World Cup turned up only one available room in the whole country! Even so, the room was quite pricey and non-exceptional–a four-star hotel going for over a thousand dollars per night next to Doha’s bustling airport.

Meanwhile, the news agency observed that most of the rooms had already been block-booked by the tournament organisers to secure the spaces they needed for FIFA and assorted football bureaucrats, sponsors and their friends, and the international media.

It has also allowed the local organising committee to stop early price gouging from hoteliers.

Many of these rooms have now been made available as part of Qatar Airways, all-in packages that combine flights, rooms and match tickets. Nonetheless, the numbers are looking tricky.

For the first two weeks of the tournament, with all 32 teams and their fans in play, organisers estimate that 559,000 visitors will come to Qatar. Peak demand will be around November 27 and November 28, when they expect, amongst others, 276,000 ticket holders to be looking for accommodation.

Taking all that into account, the Qatari tourist authorities are reckoning on needing a peak supply of 130,000 hotel rooms and other rental spaces—still quite a lot for a country of just three million people.

The country continues to build hotels at a frantic rate, and the Supreme Council is hoping that as many as another 25,000 rooms will be available by November, though that seems pretty optimistic. Even then, 60,000 is a long way short of the target, and the rooms are overwhelmingly in expensive 5-star hotels.

So, what other options are going to be available?

In the run-up to the FIFA Arab Cup, held in Qatar in December 2021, the organisers launched their “host a fan” campaign. Qataris were encouraged to take a visiting fan or two into their homes as guests or lodgers.

In the battle between Qatari’s deep tradition of hospitality and their privacy and conservatism, the latter seems to have won. Take-up has been so low that the organisers aren’t releasing figures.

A better bet will be the two large cruise ships that will be docked in the city’s port with views of Doha’s skyscraper skyline. They will provide over 4,000 rooms, with a two-person room at £3,000 for six nights.

If that seems too steep, a more affordable option will be camping in the desert outside Doha.

After consulting with the organisers of the Coachella and Glastonbury festivals, the Qataris are building a small tent city, accommodating a few thousand fans, about an hour south of Doha on a flat piece of desert between the dunes and the gulf.

Economically it’s an attractive option, but as the Supreme Council said: “We have always viewed the ability to camp as an offering of traditional Qatari hospitality, not as a solution to accommodation shortages.”

Madinat, a new satellite city about 15 miles outside Doha, looks like it will be doing much of the heavy lifting on this issue. Two dozen hotels are nearing completion, as is a massive complex of rental apartments that will, organisers claim, house up to 27,000 fans. They will, unfortunately, be wholly hemmed in by a whole series of five-lane motorways, slip roads and overpasses, but there will be beds.

Qatar Tourism’s “holiday home” plan encourages locals to apply for licenses to rent out their homes on Airbnb, but the private market is looking very expensive. The best Sky News could find, for example, was the offer of a four-bedroom apartment at £20,000 a night.

Maybe with that kind of money, there will be enough private rentals to fill the gap, but there may have to be other solutions.

The Qataris remain optimistic, but at the same time, they are quietly refurbishing Doha’s old airport to increase capacity during the World Cup.

With accommodation so tight, they are expecting fans to commute from other cities in the Gulf, like Dubai and Abu Dhabi in the UAE or Muscat in Oman. But either way, it’s going to be tricky.

That said, the Qataris are flexible, well-resourced and highly averse to bad publicity, like visitors without somewhere to sleep or World Cup stadiums going empty.

One imagines they will find some solution to this seeming shortfall of rooms, and they remain adamant that all will be alright at night.

The possible data centre would be built on around 30 hectares of land.