Residents of the village of Kozacha Lopan, 30 kilometres north of the metropolis of Kharkiv, have hoisted the Ukrainian flag. 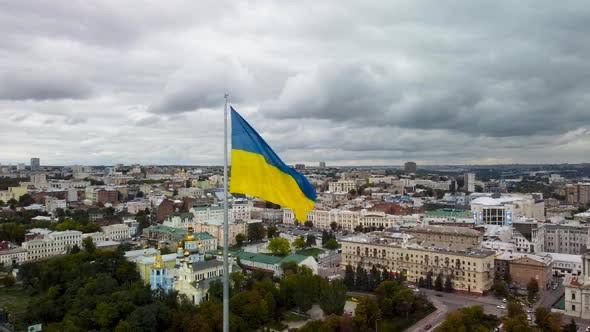 Russian troops appear to be withdrawing from the northern part of the Kharkiv region in the wake of a successful Ukrainian counterattack.

According to media reports, residents of the village of Kozacha Lopan, 30 kilometres north of the metropolis of Kharkiv, have hoisted the Ukrainian flag.

This comes after Russian units reportedly left the village, about four kilometres from the Russian border, which was occupied at the beginning of Russia’s invasion at the end of February.

Moscow had announced on Saturday it was withdrawing troops from strategic towns in the south of the Kharkiv region. Officially, Moscow justified the withdrawal by saying that units in the neighbouring Donetsk region should be reinforced.

However, many experts assume that the Russians recently came under so much pressure from the Ukrainian advance in the Kharkiv region that they decided to flee.

Since the beginning of September, Ukrainian troops have retaken more than 3,000 square kilometres as part of a counteroffensive, according to their statements.

Previous figures said Russian troops occupied about 125,000 square kilometres in Ukraine, one-fifth of the country’s territory, including the Crimean peninsula.

“The liberation of Izyum would be the most significant Ukrainian military achievement since winning the Battle of Kyiv in March,” the Institute for the Study of the War (ISW) said in its situation analysis on Sunday.

The experts said this means that Russia’s planned advance on the Donbas from the north has failed.

Meanwhile, following the rapid advance of the Ukrainian military in the northeast of the country, not all Russian troops have managed to withdraw, according to Kyiv.

“In the Kharkiv area, enemy units from the 20th Army’s 3 Motorised Rifle Division are cut off from supply routes and are in a panic,” the Ukrainian general staff said in its situation report on Sunday.

Casualties were high on the Russian side, with 400 killed in one day. The information could not be independently verified.

“Over the past 24 hours, Ukrainian forces have continued to make significant advances in the Kharkiv region,” British intelligence said in its latest situation report on Twitter.

After the heavy defeats around Kharkiv, Moscow is again holding out the prospect of negotiations with Kyiv.

“Russia does not reject negotiations with Ukraine, but the longer the process is delayed, the harder it will be to reach an agreement,” Foreign Minister Sergei Lavrov said on state television.

The talks, which began shortly after Russia launched its war against the neighbouring country on February 24, have been suspended for months.

Moscow blames Kyiv for the halt in negotiation but at the same time sets tough conditions for peace, including heavy territorial losses.

At the same time, Ukraine continues to demand tanks and weapons from the West to keep the pressure on Russian troops high. After a meeting with his counterpart Annalena Baerbock in Kyiv, Foreign Minister Dmytro Kuleba stressed that two German Leopard tanks are urgently needed.

Also, on Sunday, Ukraine’s Zaporizhzhya nuclear power plant was completely disconnected from the power grid and shut down.

Despite international warnings, Europe’s largest nuclear plant has been under fire for weeks, and Russia and Ukraine blame each other for escalating the situation around the facility.

According to Enerhoatom, the embattled plant had already been operating in “island mode” for the last three days, meaning that it was only producing electricity for its own supply since all lines connecting it to Ukraine’s power grid had been broken by shelling.

On Saturday evening, a line to the power grid was restored. It was then decided to supply the nuclear power plant via this line and to shut down the last functioning reactor unit and cool it down to a safe cold state.

The plant had already seen an emergency shutdown in August after the site was shelled. Both sides have traded blame for this.