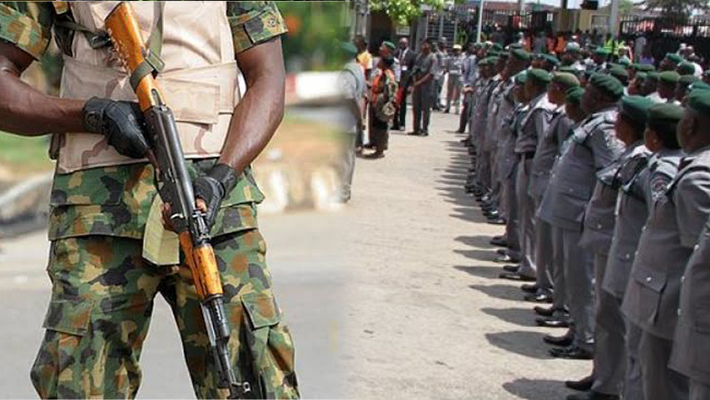 A soldier attached to 243 Recce Battalion Ibereko, Badagry, Mahmud Sulaiman, has committed suicide after he shot dead a customs officer at Seme border on Wednesday.

The incident occurred when the team leader tried to retrieve the gun from Mr Sulaiman following his strange behaviour.

“In the process of retrieving the cocked weapon from him, which he resisted, he accidentally fired a shot, and the stray bullet hit one inspector of customs, C.N Walter.

“The customs officer, who was attached to Seme Border Area Command, was rushed to Badagry General Hospital for treatment.

“But unfortunately, the customs officer died at about 6:40 a.m. on Thursday in the hospital.

“Subsequently, Sulaiman also shot himself and died on the spot,” the source said.

The incident occurred at about 7:45 p.m. on Wednesday at Oloko checkpoint, Gbaji on Badagry-Seme expressway.

It was learnt that Mr Sulaiman, recently redeployed to the Ibereko Battalion from the Theater of Operation in the North-East, had behaved abnormally since assumption of duty in Badagry.

“He always cock his AK 47 rifle fully loaded with ammunition, an action that made his team leader report the matter to the Commanding Officer of 243 Recce Battalion, Col. Nicholas Rume, where he served.

“The commanding officer immediately ordered for the retrieval of the weapon from him,” he said.

Contacted, the customs spokesman in Seme border, Abdulahi Hussain, confirmed the incident, saying the situation is under control.

“It is true, it was an accident, but the situation is under control now.

“It is unfortunate the soldier committed suicide,” he said.