The game ended even more dramatically at the final whistle as Conte and Tuchel were shown red cards for a scuffle. 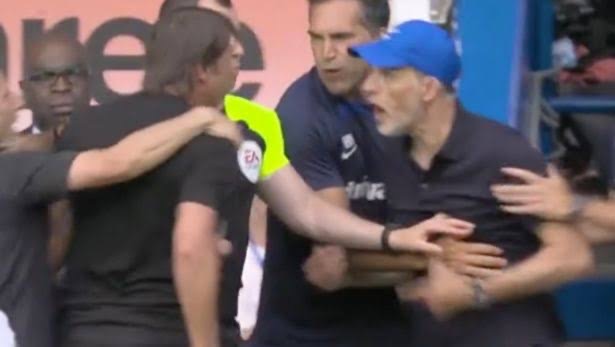 Chelsea had themselves to blame as they could only share the points with rivals Tottenham Hotspur after seeing their lead cut short twice by the visitors.

Kalidou Koulibaly opened his Chelsea account with a worldie of a goal in the 19th minute to ease nerves at Stamford Bridge and begin a spell of dominance that lasted the first half.

Spurs rejuvenated from the break and found an equaliser through Pierre-Emile Hojbjerg, who lashed a low shot past Mendy from outside the box.

Eyebrows were raised as Kai Havertz appeared to have been fouled in the build up to the goal.

Conte’s celebration across the face of Thomas Tuchel and the Chelsea bench sparked a melee that saw both managers cautioned by the referee Anthony Taylor.

Chelsea restored their lead on 77 minutes through Reece James, and Thomas Tuchel replicated the touchline celebration from Conte earlier.

Harry Kane met a 96th minute corner kick with a superb header to ensure that Spurs shared in the spoils but the referees’ failure to caution Romero who pulled Marc Cucurella’s hair just before the goal further flared tension.

The game ended even more dramatically at the final whistle as Conte and Tuchel were shown red cards for a scuffle.