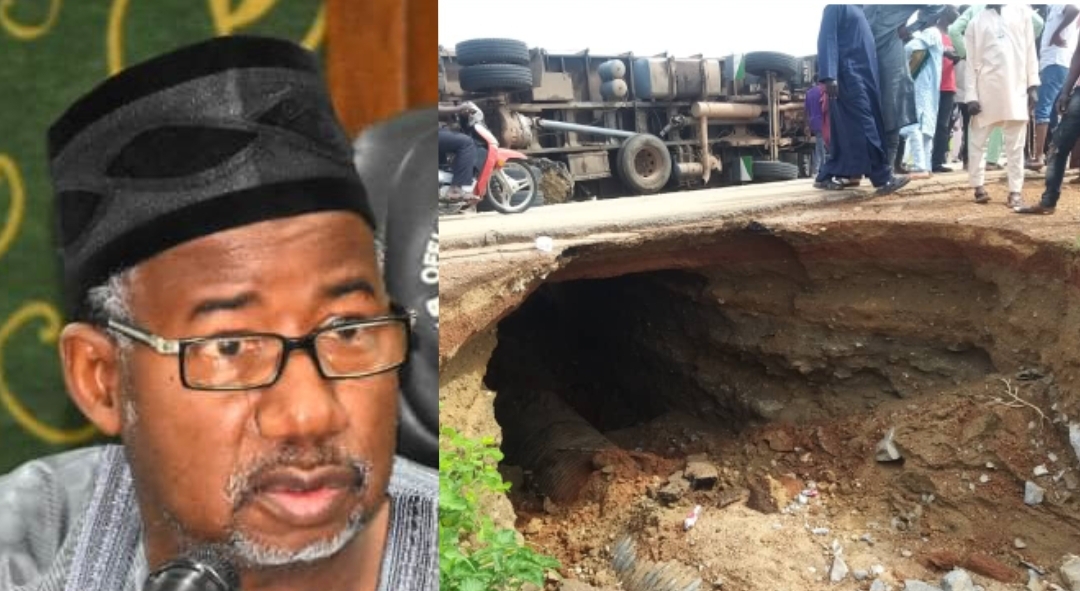 Bala Mohammed and collapsed bridge used to illustrate the story

Two important highways in Bauchi collapsed on Friday as a result of heavy downpour, leaving motorists stranded and denying them access to the road, per witnesses’ accounts to Peoples Gazette.

A section of the major highway linking Bauchi to Jos at Nabardo village in Toro local government area of Bauchi state collapsed due to the torrential rain.

The incident occurred when a trailer carrying soya beans dislodged a culvert already flooded the previous night with commuters using one lane of the road.

Allamin Yusuf, a driver at the scene, while explaining his ordeal to The Gazette, said the government and Federal Road Maintenance Agency, FERMA, are aware of the collapse and nothing has been done.

“I followed the road in the morning, it was not as bad as this, we were just using one lane but a trailer came and completely dislodged the remaining road that we were managing. I have been here for two hours trying to see whether I can bypass but if I will, I have to match people’s farms.

“FERMA and the government at all levels are aware I don’t know why they don’t take things seriously,” Mr Yusuf said.

Nummi Bayero, a passenger en route, described the government’s attitude towards the bridge as careless as the road links commuters travelling to the nation’s federal capital, Abuja.

“This is a major road linking the North-East to FCT, a very important road. I don’t know why the government will be careless about this road,” Mr Bayero said.

As of 3:00 p.m. on Friday, commuters said the government was yet to send help to the scene. Rather, road safety officials arrived alongside Nigerian Army officials to stop motorists from using the road to avoid casualties.

Comfort Sulisma, Senior Special Assistant to Governor Bala Mohammed on Special Duties told The Gazette that she was at the scene of the incident but failed to highlight what the government is doing to salvage the situation when asked. Subsequent calls to her phone were not connecting for a follow up.

The road links Bauchi state to both Kano and Jigawa States.

Speaking on how commuters were able to proceed on their journey, Amop Elisha, a witness, told The Gazette that the community dwellers assisted passengers in the conveyance of their luggages across the road where passengers swapped vehicles heading to their destinations.

“Before I got there, I was told the speaker of the House of Assembly just left the scene. When I was there, a vehicle sank inside the water with passengers inside and till I left the scene at past 1:00 p.m., they couldn’t remove that vehicle from there,” Mr Elisha said.

“There was no safe place, everyone was looking for a way out. You will come down from your vehicle with your luggages and take your clothes up walking inside the water and the people of the community will cross you to the other side where you exchange vehicles with the other people,” he added.