Some of the union’s grievances include MTN’s alleged resistance to workers’ right to freedom of association, organise and collective bargaining. 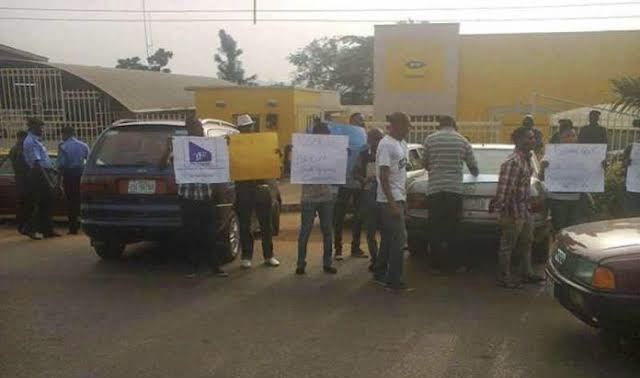 Workers under the aegis of the Private Telecommunications and Communications Senior Staff Association of Nigeria (PTECSSAN) on Wednesday picketed MTN Nigeria PLC plaza in Falomo, Lagos, to drive home some demands.

Some of the union’s grievances include MTN’s alleged resistance to workers’ right to freedom of association, organise and collective bargaining.

They held placards with inscriptions such as “Workers Rights are Human Rights”; “Unionism is a Right and not a Privilege” and chanted solidarity songs.

PTECSSAN’s general secretary, Okonu Abdullahi, accused MTN management of not allowing the union to negotiate the working conditions of workers in the organisation.

“When you have a trade union, there must be a collective bargaining agreement, which is a pointer to the existence of the union in any organisation.

“But, MTN is running away from negotiating the CBA: the procedural agreement was signed, and as result of this, it escalated to the Ministry of Labour,” he said.

He said every effort made to reach the management by way of communication through correspondence by emails proved abortive.

The union also accused MTN of not paying exit packages to its management staff but refusing to do the same to the lower cadre.

“We insisted as a responsible union that there must be an exit benefit. In the procedural agreement, it was agreed that no item should be exempted, but now to come to the table to start negotiating, MTN took off, “he said.

The secretary said the picketing exercise would be continuous until MTN negotiates and agrees on the collective bargaining agreement within the shortest possible time.

“Ultimately, if they are still refusing like they have always been doing to sit down with us and negotiate, we can assure them that their network will have to be disrupted.”

Meanwhile, a source in MTN, who pleaded anonymity, said the issues raised were still pending before the Ministry of Labour.

“Since February, MTN has filed a trade dispute with the Ministry of Labour, which statutorily is obligated to look into the dispute, which is still pending, “the source said.