The 2023 Contest-Tinubu, Atiku, Obi and Kwankwaso 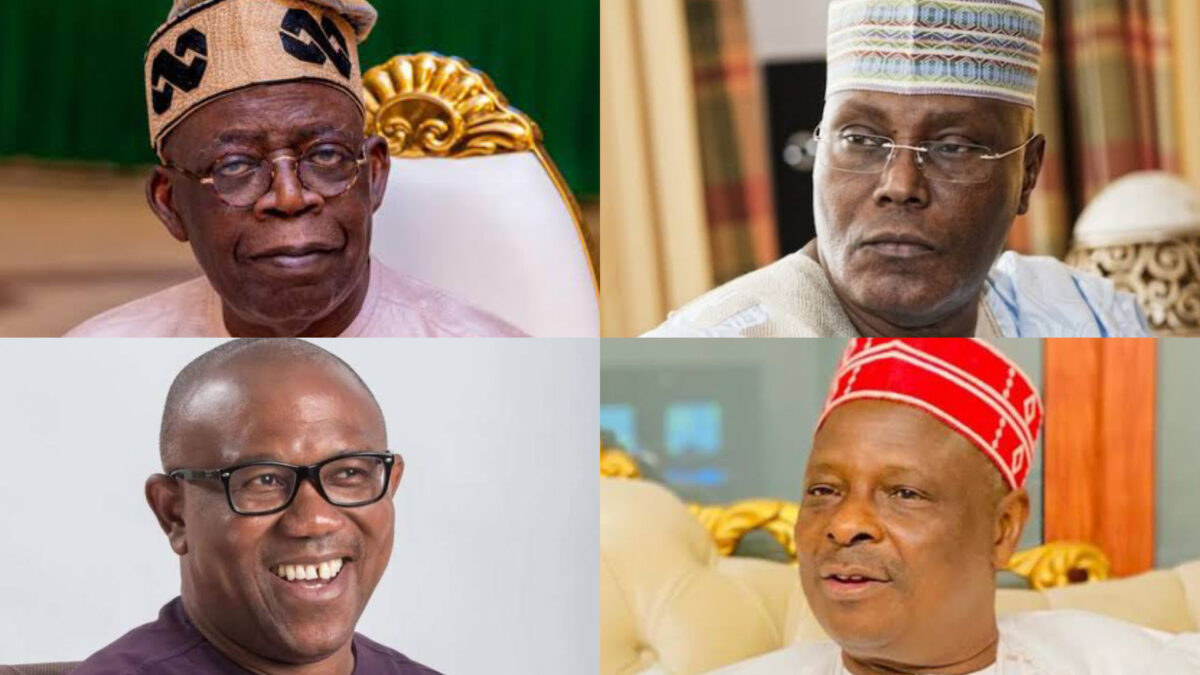 The battleground formation is now more-or-less complete-barring intervening catastrophic events, Nigeria’s next president will be one of Asiwaju Bola Ahmed Tinubu of the All Progressives Congress (APC), Alhaji Atiku Abubakar of the Peoples Democratic Party (PDP), Mr Peter Obi of the Labour Party (LP) and Engineer Rabiu Musa Kwankwaso of the New Nigeria Peoples Party (NNPP). These four candidates and parties will probably, between them, share ninety percent or more of valid votes cast during next year’s presidential ballot.

These candidates and their running-mates emerged from a crowd of more than forty (40) individuals who showed interest in the presidency across several of the eighteen (18) registered political parties with the bulk of them concentrated, not surprisingly in the two leading platforms, the ruling APC and the main opposition PDP. The APC contest turned out to be an epic battle with more than twenty aspirants paying N100 million each to pick up the nomination forms. In the event, Tinubu emerged, quite comfortably with over sixty percent of the delegates votes cast but while the outcome may have appeared deceptively easy, Tinubu’s journey to the nomination was far from easy, if not tortuous with the highpoint being the “Emilokan” and “Eleyi” event in Abeokuta, Ogun State. The remainder of the journey may yet involve interesting turns and twists!

Atiku is a veteran of presidential nomination and electoral contests and in so far as the PDP is concerned appears to be the master of the terrain. He was the party’s candidate in the 2019 general election; sought the APC ticket against Buhari in 2014; has previously contested on the platform of Tinubu’s Action Congress of Nigeria (ACN) in 2007 (against late President Umaru Yar’adua of the PDP; unsuccessfully sought PDP’s candidacy against incumbent President Goodluck Jonathan in 2011; and conceivably could have snatched the PDP nomination from a sitting President Obasanjo in 2003 if he had proceeded with his aspiration to a logical conclusion. Atiku’s interest in Nigeria’s presidency, like Tinubu’s is a long-term proposition (!) dating back to 1992 when he contested the 1992 nomination of then Social Democratic Party (SDP) along with late MKO Abiola and Babagana Kingibe!!!

Peter Obi is the surprise phenomenon in the 2023 presidential race. He was Atiku’s running mate in 2019 on the PDP platform and I had written him down as likely to run again with Atiku. His reputation for frugality as Anambra State Governor on All Progressives Grand Alliance (APGA) platform for eight years appears to have served him well and he has galvanized a movement of youths and other aspirational Nigerians around his candidacy. He also appears to have the support of some notable elders not least Obasanjo and Chief Ayo Adebanjo of Afenifere. He is clearly the most popular candidate on social media and may yet translate some of that support onto the ballot box.

Kwankwaso has also engineered a new political movement around his Kwankwasiyya group and has managed to expand beyond his core loyalists with former rival Ibrahim Shekarau and other Kano-Kaduna political notables embracing NNPP which is North-centric in the same way Obi’s LP may be said to be South-centric.

I referred earlier to possible or plausible catastrophic events barring which one of these four individuals is likely to be Nigeria’s next president-socio-political chaos, including large scale breakdown of law and order, insurrection or religious uprisings; a military intervention either organic or orchestrated; or a biological act involving mortality especially since at least two of these front runners are in their 70s, well above Nigeria’s average life expectancy.

My strategy consulting firm RTC Advisory Services and its political consulting affiliate, Stairways Communications and Advocacy Ltd have both been tracking the evolution of the 2023 presidential contest (and some key state elections) since December 2021 and some striking observations emerge from analysing the four frontline candidates-1) The four candidates fall into two generations-the 70s (Atiku and Tinubu) and the 60s (Obi and Kwankwaso) and these demographics have practical consequences for their candidacies and support base 2) Tinubu and Atiku are a mirror image of each other. They both joined politics around 1990; started their political careers from the same Peoples Front/Yar’adua faction of the SDP; were both involved in different ways with MKO Abiola and “June 12”, came together in the ACN and have similar strengths and weaknesses. They have similar policy inclinations in terms of being comfortable with markets and private investment though Tinubu tends towards market/welfarist and Atiku market/capital. Their major difference is that one is Yoruba from Lagos and the other Fulani from Adamawa!!!

Peter Obi and Kwankwaso are younger and fresher and both have created movements around their persons and may be regarded as “challenger candidates”. While Obi’s policy inclination may be described as market/entrepreneurial, Kwankwaso is likely to be the only statist policy maker of the four.

How has each of these four fared since their emergence as candidates? Tinubu started in front as a candidate of the ruling party and with the seeming support of APC’s South-Western and Northern governors. One of his key risks, the issue of “Muslim-Muslim” candidate has crystallized and, in my opinion, has been mismanaged thus far. While rational analysts can understand the political calculations behind the all-Muslim APC ticket, no one can justify the arguments presented in support thereof! It is disingenuous to say it had nothing to do with religion, but competence when every informed observer is aware that the North insisted from day one that the APC running mate had to be a Northern Muslim.

The fiasco of clearly “fake and rented Bishops” is severely damaging to the campaign and has to be viewed as an insult by every Christian. While his running-mate Kashim Shettima struck me as competent and articulate during Tinubu’s nomination campaign, his apparent involvement in the fake bishops saga (given that he acknowledged the presence of over 30 bishops at his unveiling) is not an encouraging sign. We have also noticed Governor Ganduje’s deliberate attempt to inject religion into South-West politics (which back-fired spectacularly!) urging Muslims in Osun state to vote for a fellow Muslim. These may not yet be completely fatal to Tinubu’s campaign, but they have certainly cost him support in several quarters! I believe that Tinubu must engage seriously and substantively with the Church rather than have his spokesmen and Northern politicians issuing insensitive and insulting statements.

Tinubu faces other risks from “allies” North and South who may not wish to see him as president, and I doubt that he can accurately predict the fidelity of certain regional support bases in a campaign in which positions will fluctuate along the way!

Atiku after successfully clinching the PDP ticket has also lost some of his way, with his own problems also emerging from his choice of running-mate. Again, objective analysts can understand Atiku’s selection of Delta State Governor Ifeanyi Okowa rather than more controversial and volatile Rivers State Governor, Nyesom Wike but again the process has been grossly mismanaged. Wike is credible when he says he didn’t request the vice-presidential ticket; Atiku offered it to him. And then, why set up a 17-man committee if you were not going to follow their recommendation? Wasn’t it foreseeable that the committee would more likely than not support Wike who has been a pillar of the PDP? Wike (and his supporters Governors Makinde, Ortom, Ifeanyi Ugwuanyi etal) would be justifiably angry if after 14 out of 17 members of a committee support him, the process is jettisoned especially after the betrayal of Sokoto State Governor Aminu Waziri Tambuwal. Atiku also has work to do cleaning up this fiasco of his own making, even though he has received a fillip from PDP’s victory in the Osun governorship election!

Peter Obi has captured the imagination of a new generation of Nigerians who are hungry for change, ironically the same movement by-and-large who enthusiastically trooped to Ojota in 2012, chanted “bring back our girls” and supported Buhari and the APC in 2015. They have been disappointed once before, but Obi appears to offer new hope. It remains to be seen if the fervour and “obedience” will manifest at the polling booths and in large enough numbers to change the more familiar outcomes. Kwankwaso may de facto be contesting the governorships of Kano, Kaduna and one or two other states in the North as well as some legislative seats in those places. It is also possible that in the end, both Obi and Kwankwaso may have to choose between Tinubu and Atiku.

Opeyemi Agbaje is Founder and CEO of leading strategy and business advisory firm, RTC Advisory Services Ltd. He was former Head of Strategy and Entrepreneurship at Lagos Business School and is a lawyer, economic and policy expert and consultant on strategy and business. He is also Chairman of Stairways Communications and Advocacy Ltd, a political consultancy.