It was not the first time Mr Tinubu, who has continued to make incoherent statements, would goof in the public. 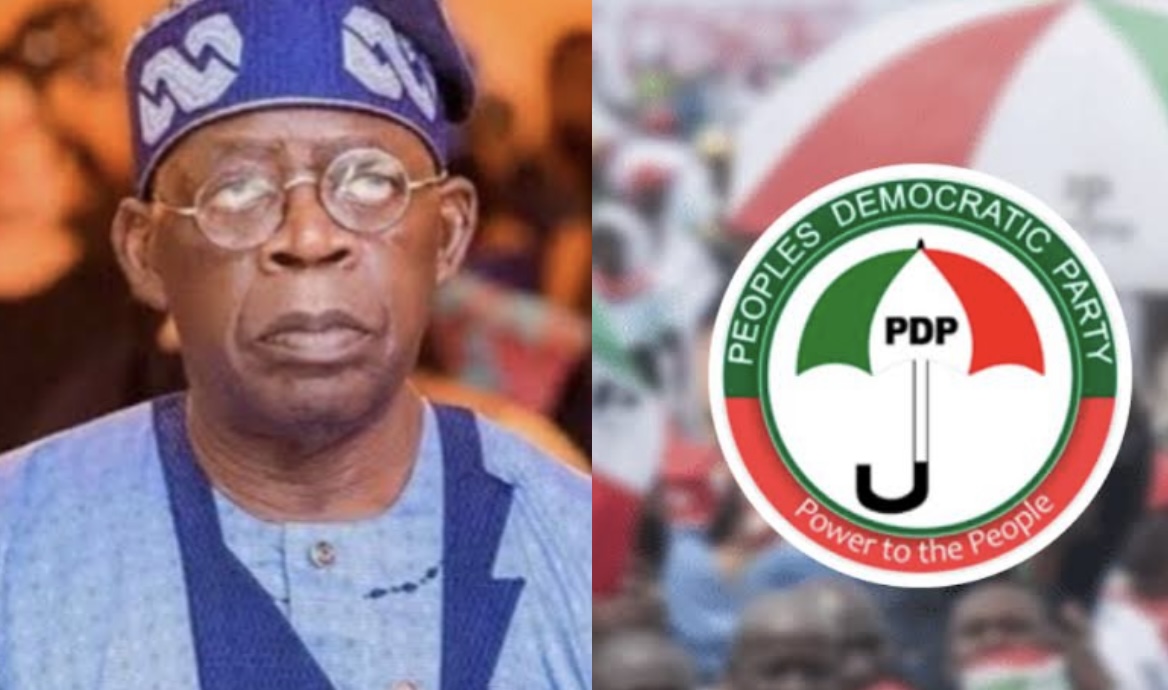 The Peoples Democratic Party (PDP) has described the gaffe committed by Bola Tinubu, the presidential candidate of the ruling All Progressives Congress (APC), during the flag-off of his campaign in Jos, Plateau, as a “prophetic blessing” for the opposition party, ahead of the 2023 election.

Mr Tinubu, while rounding off his speech on Tuesday, suffered a slip of the tongue as he erroneously prayed for the PDP even though he wanted to mention his party, APC.

But the PDP stated that since Mr Tinubu committed the public error, the opposition party has been receiving solidarity from members of the ruling APC who believe that the ‘prayers’ of the former Lagos governor was a “divine act of God to point the nation to the right direction.

“Since Tinubu’s prophetic blessing on the PDP, our Party has been receiving flurries of calls, solidarity messages and visits from key members of the APC, who believe that his prayer is a divine act of God to point the nation to the right direction,” said in a statement issued on Wednesday by Debo Ologunagba, a spokesman for the PDP.

Mr Ologunagba added that the fact that Mr Tinubu made the error is a “pointer that it was not a slip of tongue but a divine proclamation that the hope for Nigeria, which he harped on, can only come from the PDP.

“This perhaps explains why Tinubu was incoherent and had no concrete message to Nigerians at the flag-off of his campaign. He could not proffer any solution or idea to the challenges of insecurity, disunity, unabated killings, rising unemployment, tumbling Naira, collapsing economy with unprecedented debts of over N40 trillion arising from somersaulting macro-economic policies of his failed and corrupt APC government.”

At his first campaign outing, Mr Tinubu goofed to the surprise of the party’s supporters at the Jos Township Stadium.

He said, “I hand over back to the chairman of the party before he disciplines me for leaving the president waiting and keeping him standing. We are calling, inviting the national chairman to invite the president…(sic). At least to close this part of the ceremony. Thank you, God bless you, God bless Nigeria. God bless PD….”, before retracing his speech to say ” APC.”

It was not the first time Mr Tinubu, who has continued to make incoherent statements and battling with health challenges, would goof in the public.

In July, the former Lagos governor almost forgot the name of his political party while speaking to members in public and addressed the APC as “Action Group.”

Mr Tinubu, 70, had also in October committed another blunder in Kaduna when he erroneously hailed governor Nasir El-Rufai’s creativity in turning the fortunes of his state from a “rotten situation into a bad one,” causing a stir among attendees at the public event.

The speech of the APC presidential candidate in Kaduna further sparked rumours that his return from London at that time might be that he’s suffering from ‘dementia’ even though his aides have repeatedly defended his frail health status.