The market was said to have been illegally constructed on a plot of land owned by the National Council of Women Societies. 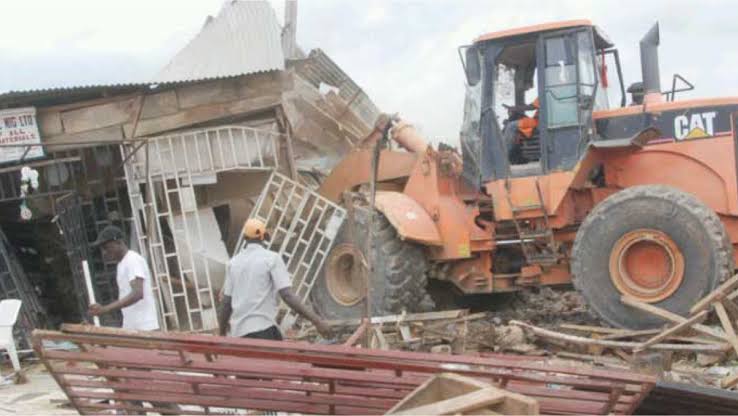 The Federal Capital Territory Administration (FCTA) on Monday demolished a mini-market allegedly operating on a plot of land belonging to the National Council of Women Societies (NCWS) at Area 1 illegally.

Ikharo Attah, the senior special assistant on monitoring, inspection and enforcement to the FCT Minister, said the market constituted a nuisance to the environment.

“This place is constituting a nuisance to Area 11, it started as a small restaurant, gradually it metamorphosed into a market, now it has become a serious challenge.

“The activities on this single plot of land have become a serious issue; the FCT Minister, Malam Mohammad Bello, has directed that we should clear the place,” Mr Attah said.

Mr Attah said after the demolition, the landowner would decide on what to do with the plot.

However, a trader, Rafat Mohammed, said she was worried because there was nowhere for her to start up.

“This is worrying; where will I go and start? The government is supposed to provide an alternative place for us before the demolition,” she said.

Another trader, Ibrahim Lawal, who expressed anger over the incident, admitted that the FCT Administration gave them a notice of three months, but it was not yet time.

“I feel very bad because we were given three months but we are not up to the three months; we were following up the issue till late last week, the people that came told us that they were sent by the minister,” he said.

Also, a customer at the scene, Charles Olili, said the place was the only nearby restaurant that its food was affordable but that “the government had powers to decide what is good for the people.

“It is a legal plot of land but has been turned into an illegal market,” he said.