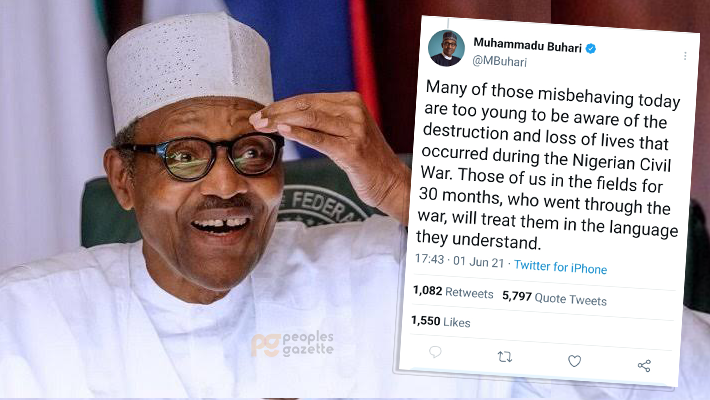 Daniel Bwala, a legal adviser to Deputy Senate President Ovie Omo-Agege, has falsely claimed that Twitter denied knowing President Muhammadu Buhari before his tweets declaring war on the Igbos were deleted on the platform.

The president’s tweets threatening punishment on the Igbos, while referencing his role in the Nigerian Civil War of 1967-70, stirred controversies on the microblogging platform, prompting Twitter to remove it for violating its “abusive behaviour” policy.

Speaking on the deletion during his appearance on Channels TV Sunday night, Mr Bwala amplified a purported response from Twitter claiming that they were not familiar with the president’s name or the country he leads.

“They said Muhammadu Buhari, we don’t know who you are or the country you lead. We came across a tweet that offended our rules and we decided to take it down,” he quoted the company to have said while describing the statement as derogatory.

Mr Bwala berated the company, describing it as an “agent of foreign forces trying to destabilise Nigeria.”

“And I said to myself ‘if you do not know as a company, a country that has more than 30 million subscribers and the president of that country, it’s either you’re the dumbest person or you’re an agent of foreign forces trying to destabilise Nigeria’,” he said.

Although the tweet where the company allegedly made the statement had gone viral on social media platforms, Digital Africa Research, found that it was photoshopped by propagators of fake news online.

The Buhari regime had suspended the operation of Twitter across Nigeria two days after the tweets were removed, with Information Minister Lai Mohammed saying the platform had been used to spread false information and “activities that are capable of undermining Nigeria’s corporate existence.”

The Attorney-General Abubakar Malami also sought to enforce the ban by threatening to arrest and prosecute anyone who tweets in Nigeria. The order came three days after Peoples Gazette published a memo in which Mr Malami advised the president to suspend the Constitution and declare martial law to stem rising insecurity.

But speaking on the enforcement of the ban, Mr Bwala said even though the current administration has the legal right to ban the platform in Nigeria, it lacked the powers to prosecute Nigerians for using it.

“Now, what is very clear is that the Nigerian government cannot prosecute Nigerians for using Twitter because the law of the land says nobody can be tried or convicted for an offence that is not defined by law for which the punishment is prescribed in a written constitution. That area, there is no further discussion on that,” he said.

When contacted by Peoples Gazette, Mr Bwala admitted he did not know the tweet was fake.

“It was just this morning that someone called my attention to it and sent me a screenshot where that particular tweet was tagged fake. But before today I had seen it on Twitter myself and when I saw it there was no tagging that it was fake. When I saw it I asked like two to three people who confirmed seeing the same and there was no mention of fake.

“But this morning while I was granting an interview with AIT, somebody sent to my WhatsApp and when I checked it during the break I saw picture where it was tagged fake and I will address it tonight,” he told The Gazette.