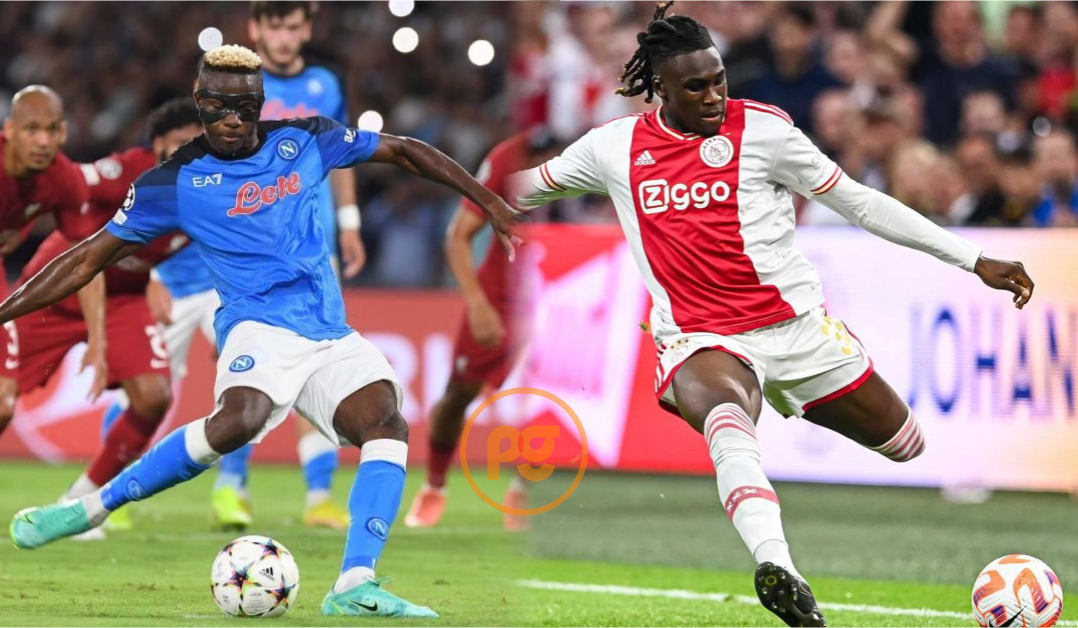 Super Eagles forward Victor Osimhen only saw forty-three minutes of action as Napoli hammered Liverpool 4-1 in the Group A match of the 2022/23 UEFA Champions League at the Diego Armando Maradona Stadium on Wednesday night.

Osimhen could have opened his scoring account in this season’s Champions League campaign but had his penalty kick saved by Alisson Becker before he leaped out of the match due to injury.

It only took Napoli five minutes to go ahead in the Group A fixture when Piotr Zieliński scored a penalty awarded to the hosts after James Milner handled Zieliński’s shot inside the 18-yard box.

Moments later, another penalty was given to Napoli after Van Dijk fouled Osimhen but the Nigerian failed to find the back of the net from the spot-kick Alisson did well to save it.

However, Zambo Anguissa doubled Napoli’s lead in the 31st minute before Giovanni Simeone netted the hosts’ third goal of the match towards the end of the halftime whistle.

The first half ended 3-0 in favour of the Italian side.

Napoli picked it up from where they left it in the first half when Piotr Zieliński grabbed his brace of the night as the ‘Gli Azzurri’ went four-nil up in the 47th minute.

In the 85th minute, Alexander-Arnold launched a cross to Van Dijk but the header was cleared just before it reached the goalkeeper’s area.

Liverpool made the last attempt at goal in the encounter when Diaz fired a shot in the hosts’ 18-yard box but it couldn’t go past the crowded Napoli’s defense.

Napoli players jumped into celebration as the referee blew the full-time whistle to claim a surprising 4-1 victory.

Bassey, a defender, put in an impressive performance in the composed Ajax’s backline to keep a clean sheet for his team.

Edson Álvarez, Steven Berghuis, and Mohammed Kudus all got their names on the score sheet in the 17th, 32th and 33rd minute respectively as Ajax went 3-0 up in the first 45 minutes at the Johan Cruijff Arena.

The Eredivisie champions maintained total dominance in the second half of the match, creating threats in the Rangers’ half to extend their lead.

Rangers shot themselves in the leg when Jack played a poor pass to Goldson but former Tottenham man Steven Bergwijn grabbed the ball and slotted it into the net to seal the victory for Ajax.

At the blow of the full-time whistle, Bassey and his team walked away with an impressive 4-0 victory to go top of Group A.