In the capital Moscow alone, there were about 530 protesters in custody; in St. Petersburg 480. 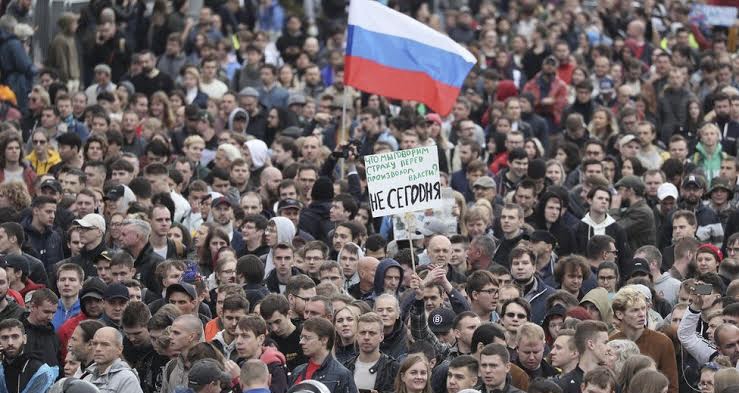 The Kremlin said on Thursday that it legally continues to regard its invasion of Ukraine as a “special military operation,” a day after a partial mobilisation order sparked protests across Russia amid fears the war was entering a dangerous new phase.

President Vladimir Putin decreed the mobilisation of 300,000 reservists on Wednesday in order to garner more soldiers for the military’s faltering campaign in Ukraine.

The move caused unrest among the Russian population, as there are reservists in almost every family, and raised questions about whether Moscow now considers itself in an all-out war with Ukraine.

Kremlin spokesman Dmitry Peskov said the government still considered the conflict a “special military operation,” a phrase it has used for its grinding assault on its neighbour for nearly the past seven months.

Reports that there has been a rush of men fit for military service seeking flights to Turkey and other countries are exaggerated, Mr Peskov said.

Turkish carriers, for instance, reported a surge in demand for one-way tickets in the hours after Mr Putin’s announcement, while Finland has registered an uptick in traffic at the Russian border.

The main recipients of the call-up notices will be men who have not long since completed their military service.

According to Russian agencies, Mr Peskov said that it was up to the Defence Ministry to decide up to what age soldiers should be drafted.

Civil rights activists reported that some of the people receiving orders to serve had been detained during anti-war protests that broke out in 38 cities across Russia on Wednesday evening.

More than 1,300 protesters were taken into custody, the independent OVD-Info monitoring group reported, some of whom were then ordered to report for muster.

In the capital Moscow alone, there were about 530 protesters in custody; in St. Petersburg 480.

There was no information from state authorities about the protests.

According to OVD-Info, the police injured several of those detained.

In Moscow, a young man suffered a concussion and a young woman lost consciousness, the group said. Nine journalists were also said to be held.

As a rule, those detained are sentenced to fines or further detention after a night in police custody.

Criminal cases are brought against some. In the first weeks after the February 24 invasion of Ukraine, 15,000 people were detained during protests.

Since then, Russia has further increased penalties for opposition to the war.

“Those who meet the requirements of partial mobilisation should help with their participation in the special military operation,” the Duma chief announced on his Telegram channel.

“There is no protection for the deputies,” the Duma chief added.

The head of parliament seemed to be reacting to the view, not uncommon in political circles, that Mr Putin’s call for a bolstering of forces does not apply to them.

“Russia is likely to struggle with the logistical and administrative challenges of even mustering the 300,000 personnel,” the Ministry of Defence in London said in its daily intelligence update on the war.

“It will probably attempt to stand up new formations with many of these troops, which are unlikely to be combat effective for months,” it added.

The ministry views the partial mobilisation as a sign of Russian weakness: “The move is effectively an admission that Russia has exhausted its supply of willing volunteers to fight in Ukraine.”

Meanwhile, the Defence Ministry in Moscow confirmed on Thursday that Ukrainian authorities released from captivity 55 servicemen fighting for the Russian side as part of a huge prisoner swap involving some 260 people.

Kiev said 205 Ukrainian soldiers returned from Russian captivity, including five commanders seen as heroes for having led the defence of the besieged port city of Mariupol in the spring.

The Britons have already returned home, according to the BBC.

Elsewhere, at least six people were reported killed by artillery fire around a market in the eastern separatist stronghold of Donetsk.

Six others were injured, the head of the Donetsk city administration, Alexei Kulemzin, wrote on Telegram on Thursday.

He blamed the Ukrainian army for the shelling.

Kiev regularly rejects such accusations and speaks of staging by separatists loyal to Moscow.

The statements cannot be independently verified.

Meanwhile, plans by four Russian-occupied regions in Ukraine to hold referendums on joining the Russian Federation as soon as Friday continued to come in for harsh criticism after roundly being called a “sham” by the West.

The Turkish Foreign Ministry warned the “illegitimate” votes will only “deepen instability” and that Ankara supports “Ukraine’s territorial integrity.”