Sometime in 2021, a male student was stabbed to death for trying to stop a group of robbers from robbing some female students of their phones. 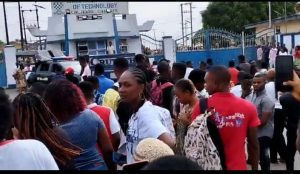 Hundreds of students of the University of Cross River (UNICROSS) on Tuesday barricaded the school gate in protest of constant robbery attacks.

The protest, which was at the main gate of the institution, followed what the students termed constant robbery of female hostels by armed men.

The students, who prevented both staff and visitors from entering the school, said they would remain there until the authorities did something to assuage their fears.

One of the protesting students, David Ekpo, said the robberies of female hostels in the school were becoming one too many.

“This is not the first or second robbery incident but the third this month since we resumed and nothing has been done to improve the security situation in the school.

“Last night, another female hostel was attacked, rather than protect us, the policemen on campus prefer to chase us around campus,” he said.

A 200 level female student, who identified herself as Cynthia Olam, said the robberies, which were becoming too frequent, was having a psychological toll on the female students.

She said that, “Since the Academic Staff Union of Universities (ASUU) suspended their strike and they came back, this is the third time they have robbed us.

“The robberies are becoming too frequent and some of us feel so insecure. If the situation does not improve, it will have a terrible impact on our studies, particularly we the girls.”

Efforts to get reactions from the institution’s Vice Chancellor, Prof. Austin Amgba, and the Public Relations Officer, Onen Onen, failed as they both declined comments at press time.

Recall that in 2021, a male student was stabbed to death for trying to stop a group of robbers, who attacked some girls and snatched their phones.