What crackdown on Kanu and Igboho shows, and who owns Daily Trust?

Although Boko Haram is infinitely more lethal than IPOB— and actually controls vast swathes of territory—the regime has not shown the same zeal to annihilate them. 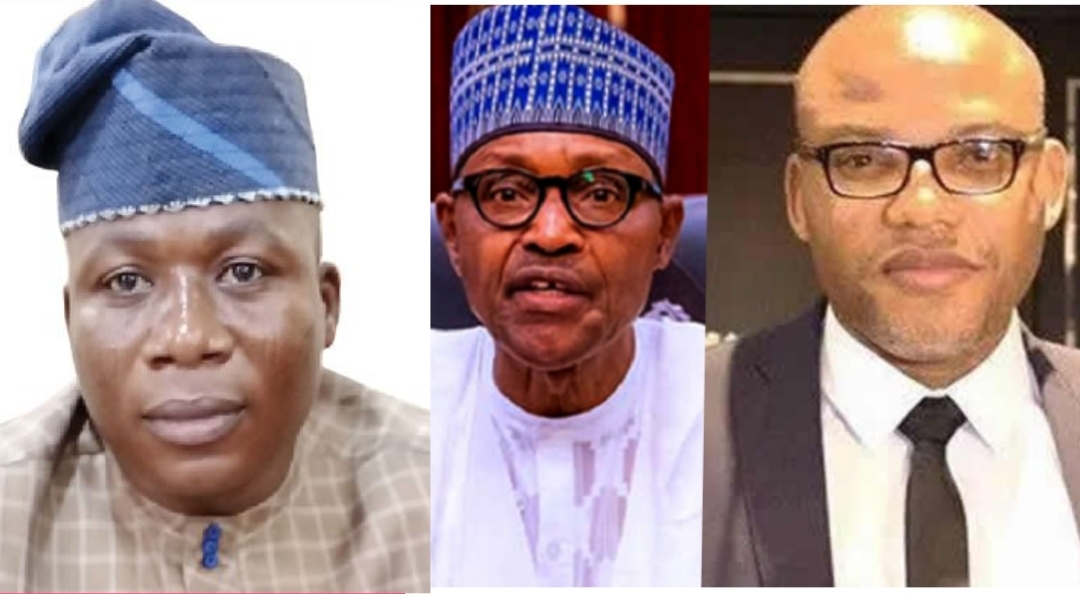 Two concessions are necessary before I make my points. While advocacy for self-determination is not criminal and is protected by international laws to which Nigeria is a signatory, calls for violence, instigation of violence against security officers, or machinating a plot to violently dissolve sovereign polities are criminal and have no legal protection anywhere in the world. It’s worse if the calls transcend the rhetorical realm and are materialised in actual acts of violence.

Second, no modern country in the world brooks challenges to its sovereignty with listless acquiescence. It’s always the case that countries deploy the instruments of violence to contain or eliminate threats to their territorial, political, and symbolic dominion— and their monopoly of legitimate violence.

In light of these concessions, Nnamdi Kanu’s arrest and repatriation from Addis Ababa on June 29 are neither unusual nor indefensible because there is irrefutable material evidentiary proof of his habitual incitement of mass murder. He instructed hordes of headless, cretinous automatons who worship him and interpret his demented pronouncements as inviolably divine commandments to commit acts of violence.

As far as I know, though, Sunday Igboho has not launched offensive violence against the government, does not instruct his followers, who are comparatively few, to murder civilians who disagree with his methods, as Kanu did before his arrest, and seems concerned only with defending his people against attacks by herders and advocating the emergence of a Yoruba nation out of Nigeria.

Nonetheless, the regime’s speed has tackled Kanu and Igboho has brought up at least two salient issues in bold relief.

First, the intricate bilateral manoeuvres and sleuthing that preceded the arrest of Kanu in Ethiopia is proof that honchos of the Nigerian state have the resources and capacity to end terrorism and banditry in the North—and elsewhere in Nigeria— if they want to. They acted on Kanu—and later Sunday Igboho— only because Buhari’s emotions are involved.

In other words, it would take for Buhari to be personally affected by terrorism and banditry for him to act. If one of his children were to get kidnapped and murdered by bandits, banditry and kidnapping would be history in Nigeria. The security forces exist almost entirely to satiate the impulses of people in power. That’s what happens when a country has no apolitical institutional structures and when power is personalised.

Someone noted in a comment on my Facebook status update on Kanu’s arrest that if bandits in the North were to transition from being murderous leeches terrorising poor, rural folks to being “freedom fighters” asking for a change of government and upstaging Buhari from power, they would be all burned to clinkers.

The second lesson is that this regime has shown time and again that it will never transcend ethnoreligious favouritism in its response to common threats. Boko Haram wants to violently dissolve the Nigerian state and replace it with a regressive, seventh-century Talibanic theocracy, starting from the northeast. That’s actually worse than IPOB’s quest to secede from Nigeria, which started peacefully before it devolved into its current spectacles of violence as a direct consequence of the government’s mismanagement of peaceful dissent.

There is no country on earth where no fissiparous groups are wanting to break away from a union. Even the United States, seen by many as the archetype of a cohesive nation, which also fought a Civil War nearly 200 years ago to keep it together, still contends with pockets of separatist agitations from New England and the South. They’re allowed to exist so long as they aren’t violent.

Now, although Boko Haram is infinitely more lethal than IPOB— and actually controls vast swathes of Borno and Yobe states—the regime has not shown the same zeal to annihilate them as they have shown to comparatively benign separatists from the South.

On many occasions, according to reports by the Daily Trust and the BBC, the Nigerian military came close to arresting Boko Haram’s Abubakar Shekau, but “orders from above” always told them to back off. Shekau ended up being killed by a rival Boko Haram faction and not by the government. Not to mention that the government has a program to so-called rehabilitate and reintegrate “repentant” terrorists who often go back to their old ways and cause the death of hundreds of Nigerian soldiers thereafter.

Kanu became a priority only because Buhari has a personal emotional investment in getting him. Igboho is targeted because his rage is directed at the Fulani with whom Buhari identifies to the exclusion of others. Recall that the only time Buhari ever visited Zamfara in connection with the horrendously bloodstained security situation was to protect what he perceives to be the interests of Fulani herders whose cattle were reportedly being stolen by bandits. He even donned military fatigues for this expedition. He shows no care for victims of rural banditry, apparently because they aren’t people he self-identifies with.

That tells us that if Buhari had a real personal, emotional investment in ending Boko Haram terrorism and banditry, they would have been eliminated or least weakened to the fringes by now. There’s no question about that.

In the aftermath of my May 8, 2021 column titled “Celebration of Kabiru Yusuf’s Election as NPAN President”, where I paid tribute to Daily Trust’s chairman and described him as the paper’s “majority shareholder” with at least 40 per cent of the company’s shares, I encountered a book by the Kogi-born Alhaji Isiaq Ajibola, a co-founder and retired Managing Director/Chief Operating Officer of Daily Trust, titled Journalism and Business: My Newspaper Odyssey that tells a complete story of the paper.

The book carefully chronicles the history, growth, struggles, and triumphs of Media Trust, the parent company that published the Daily Trust and its weekend editions, from the experiential lenses of the author. It shows, for instance, that contrary to what I had supposed, Malam Kabiru Yusuf doesn’t own up to 40 per cent of the shares of the newspaper and isn’t the “majority shareholder” even though, with 24 per cent of the shares, he owns the highest percentage of shares.

The paper is the brainchild of Malam Kabiru Yusuf and Isiaq Ajibola, who had worked together in the Lagos office of the defunct Citizen magazine, northern Nigeria’s star-studded, well-edited newsmagazine that had such renowned journalists as Mohammed Haruna and Adamu Adamu (current education minister who wrote the foreword to Ajibola’s book) as editors.

In his foreword, Adamu recalled Ajibola as the man who “always accompanied Kabiru Yusuf, the head of our Lagos office, whenever he came for management or board meetings in the headquarters.”

Yusuf later left Citizen to work for the BBC in South Africa, and his relationship with Ajibola grew into an enduring friendship. Upon his return to Nigeria, they decided to found Media Trust with only N20,000. When they decided to start a weekly newspaper at Ajibola’s prompting, they chose to try something new: invite young northern Nigerian journalists with a little cash to invest in the paper to make it a collective undertaking.

Ajibola points out that the company started with five shareholders: Kabiru Yusuf, Isiaq Ajibo, Mannir Dan-Ali (who worked with the BBC in London), Umar Abdullahi, Rabiu Garba, and Mohammed Jibrilla “who did not eventually take up his allotted shares” (p. 21).

The shareholders later expanded, but the shareholding was deliberately designed so that no one person can have the majority of the shares. Kabiru Yusuf has 24 per cent. Others, who are 19 in number, have 12 per cent, 10 per cent, 10 per cent, seven per cent, over five per cent, with some having less than 0.5 per cent. This is unlike the typical media ownership in Nigeria, where either a family owns the paper or a big-name politician bankrolls it.

The book also talks of the strategies they adopted to break the jinx of media publishing in northern Nigeria, such as putting more attention to the “business side” of publishing than has ever been done. I recommend the book to anyone who wants to understand the intricacies of publishing and the story of the Daily Trust.