Ecuador and Netherlands played a 1-1 draw Friday night to seal the fate of the host in the competition. 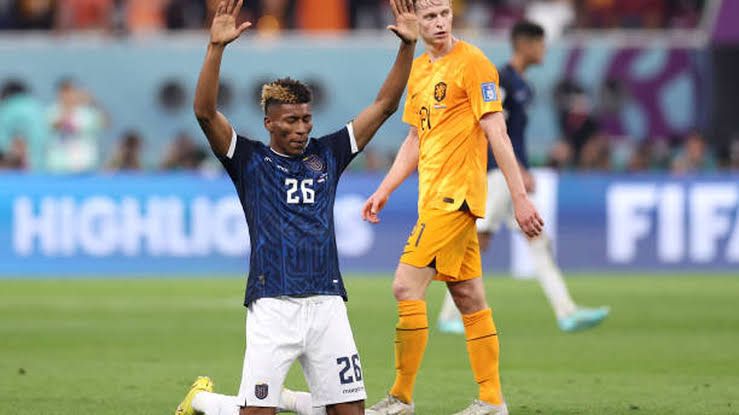 Netherlands and Ecuador played a 1-1 draw.[Photo Credit: AS USA-Diario AS]

Host nation Qatar has become the first team to crash out of the ongoing FIFA World Cup after Netherlands and Ecuador played a 1-1 draw in their second Group A fixture on Friday evening.

Following a 3-1 defeat to African champions Senegal in their second group game today, Qatar recorded its second consecutive loss of the competition. The host’s only hope was for either Ecuador or Netherlands win and wait for a favourable outcome in the last game of the group.

But one goal in each half was enough to send Qatar packing with a game to go.

Sensational Cody Gakpo netted the fastest goal so far in this competition barely six minutes into the encounter to put the Netherlands ahead, making it his second goal of the tournament.

With the chance of qualifying to the round of 16 tonight at stake, the momentum of the match continued to build up in the important fixture.

Brighton defender Pervis Estupiñán thought he had equalised for Ecuador in the added minutes of the first half but the goal was ruled out for an offside after Porozo infringed on the view of the Dutch goalkeeper Andries Noppert.

Ecuador responded immediately in the opening five minutes of the second half when Enner Valencia equalised for the South American country to increase his tournament goal tally to three.

Noppert parried Estupiñán’s effort straight into Valencia’s legs and calmly slotted it in.

Valencia almost put Ecuador in the lead shortly after his equaliser but his shot was deflected by Virgil Van Dijk into Gonzalo Plata’s legs who then followed up with a powerful curler but the ball cannoned off the bar.

Despite multiple attempts from both teams, there was no goal again in the fixture as the Oranje and the Tricolor shared the spoils at the Al-Thumama Stadium.

The fight for the two teams to qualify for the round of 16 from the group now heading to the final round of fixtures in the competition with any of Netherlands on four points, Ecuador also on four points and Senegal with three points having chances of advancing to the next round.