A goal each from Dutch sensation Cody Gakpo and Klaassen were enough to break the heart of the West African nation. 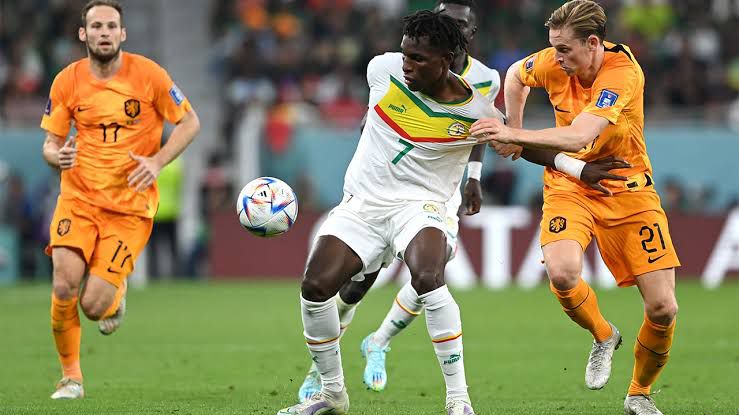 Debutant Cody Gakpo was on the scoresheet as Netherlands scored two late goals to defeat African champions Senegal in their first game of the FIFA World Cup at the Al-Thumama Stadium in Al-Thumama, Qatar on Monday evening.

Having dealt with a huge blow in eve of the World Cup campaign when Sadio Mane was ruled out of the competition following the inability of the Bayern Munich forward to recover from an injury, the team still put on an impressive display against the three-time runners up.

But a goal from Dutch sensation Cody Gakpo and Klaassen were enough to break the heart of the West African nation.

There were several moments of intensity from both sides in the early minutes of the first half of the encounter. The closest chances of each side finding the back of the net came just a few minutes apart.

Ismailia Sarr received a long pass inside the Netherlands’ 18-year box and beat Dumfries with a superb trick, curling the ball with the intention of hitting the top right corner of the net but Virgil Van Dijk deflected the ball with his head for corner kick.

Moments later, Frenkie De Jong was provided with a one-on-one opportunity to put Netherlands ahead from a counterattack but a last-gasp effort from Gaya Gueye was enough to prevent his needless pass from reaching Cody Gakpo.

With eleven shots on goal from both sides, none of them was able to go past each other’s goalkeepers as the first half ended goalless.

The intense momentum of the game continued in the second half with Lions of Teranga of Senegal and Oranje of Netherlands searching to break the deadlock.

The first real save came in the 66th minute when Senegal goalkeeper Edouard Mendy launched a counterattack play which saw Dia with the ball in the box. He fired the ball into the low right corner of the box but the Netherlands goalkeeper Noppert parried the ball to safety.

However, FIFA World Cup debutant Cody Gakpo finally broke the deadlock for the Netherlands with a powerful header from De Jong’s tipped ball into the Senegalese box to put the 2010 finalists ahead.

Senegal came close to scoring an equaliser barely two minutes later from a 20-yard shot from Gueye but Noppert got down low to his left to prevent the ball from creeping into the net.

Netherlands sealed the victory with a last-gasp goal by Klaassen. Depay went one-on-one with Koulibaly and beat him with a touch, firing the ball towards the goal which Mandy parried straight into the legs of Klaassen to send them top of Group A with Ecuador.