England beat Iran 6-2 in their opening Group B match at the ongoing Qatar World Cup on Monday. 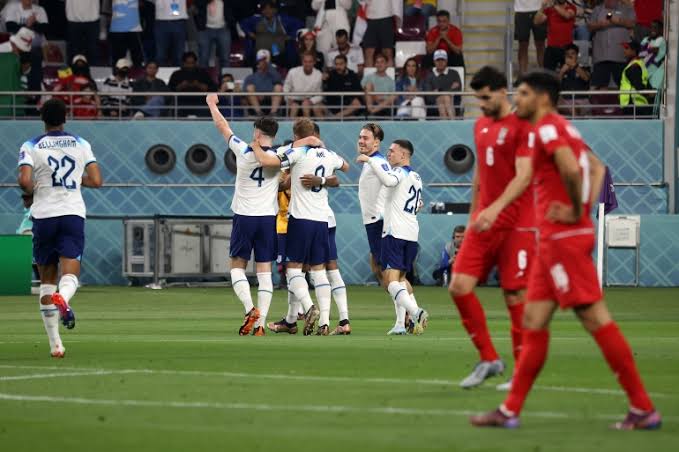 Bukayo Saka scored twice as England national team descended heavily on Iran in their first Group B game, winning 6-2 at the Khalifa International Stadium in Doha on Monday.

With three goals scored in the first half, England dominated the game from the blast of the whistle, got a deserved win, ripping Iran.

Jude Bellingham opened scoring for England with a header into the top right corner 35 minutes into the game. It was his first goal for England.

Bukayo Saka doubled England’s lead in the 43rd minute, firing in a brilliant looper into the top right corner, while Raheem Sterling made it three for England in added time of the first half, leaving Iran with three goal margin to close.

The Three Lions returned into the second half much stronger as Saka scored their fourth goal in the 62nd minute.

Taremi got Iran a consolation goal in the 65th minute. But Marcus Rashford scored in the 71s minute, increasing England goal margin.

Jack Grealish made it six for the Three Lions in the 89th minute, ruining Iran’s hope of possible comeback in the game. Taremi, however, scored another consolation goal for Iran from the spot before the final whistle.