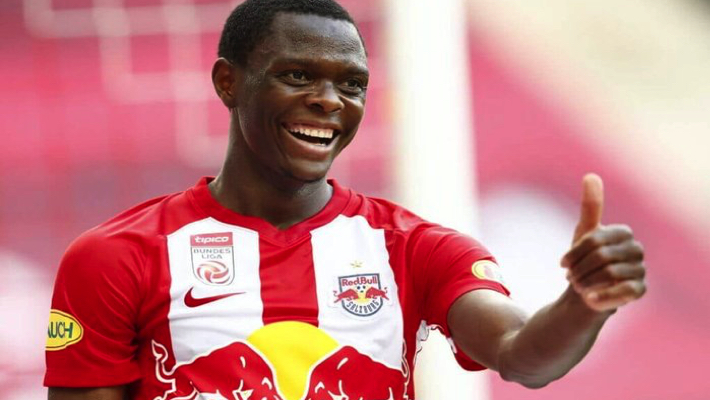 Zambian striker and Austrian League highest goalscorer, Patson Daka, has snubbed both English giants Chelsea and Liverpool for a move to Leicester City.

The RB Salzburg forward stated this in his interview with Krone Zeitung, an Austrian medium when explaining his move to Leicester City for the 2020-2021 season.

According to TalkSPORT, Chelsea and Liverpool made contacts and showed interest but Daka preferred Leicester.

The Foxes will be coughing out £25.7 million to secure the services of the Zambian who will wrestle the starting shirt from 34-year-oldJamie Vardy, Nigeria’s Kelechi Iheanacho and Ayoze Perez.

Daka who has just seven international goals for the Zambian national team in 25 appearances won the best player award at the 2017 Africa U-20 Cup of Nations and the CAF youth player of the year.

With 68 goals in 125 appearances for RB Salzburg, Daka attracted interests of Chelsea, Liverpool and Leicester City after totaling 34 goals in all competitions in the 2020-2021 season.

Hitting 23 and 24 League goals in the past two seasons for Salzburg appears to have shown the ability to show consistency on the part of the player who started his career from the Zambian League side, Kafrue Celtic.

Liverpool are looking to improve their attacking options as Sadio Mane and Roberto Firminho we’re not effective in front of goal in the 2020-2021 season with both scoring 11 and 9 goals respectively in the league.

For Chelsea, the awful misses of Timo Werner and the inability of Tammy Abraham and Olivier Giroud to break into coach Tuchel’s starting eleven have opened the Blues’ eyes to a necessity for a new proven attacking option.

Nigeria’s Kelechi Ihenacho became Leicester’s saviour in the latter part of the season with 12 League goals which helped them secure a UEFA Europa League spot and also won the 2020-2021 English FA Cup trophy.

The array of attacking players suited for his position at Anfield and Stamford Bridge were likely part of the reasons why Daka who won the UEFA Youth League with Salzburg in 2017 preferred the Foxes to both higher Premier League teams.

Daka will feature in the UEFA Europa League with Leicester next season with the hopes of winning the European title and also become the first Zambian player to win the English Premier League.