2023: Crowd that welcomed me shows Borno people are tired of APC, says Kwankwaso

He expressed confidence that his party will emerge victorious in Borno State. 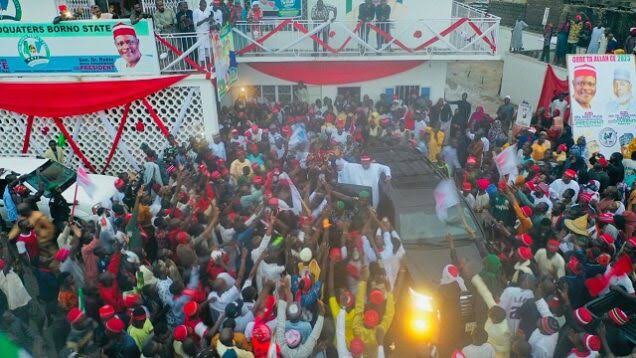 Presidential candidate Rabiu Kwankwaso says the large crowd of supporters that received him in Maiduguri on Saturday are eager to change the APC-led government.

“Look at how people came out; I was so excited, I was so happy that the people of Borno are now very ripe for a change,” Mr Kwankwaso, the flag bearer of the
New Nigeria Peoples Party (NNPP), in the 2023 election said on Sunday.

He expressed confidence that his party will emerge victorious in Borno State.

“If only the people I saw on arrival yesterday will vote for us, I can assure you we will win Borno,” Mr Kwankwaso said.

A mammoth crowd defied heavy downpour to welcome to the state capital on Saturday. Mr Kwankwaso stressed that their commitment was a demonstration of their readiness to change the status quo.

The presidential candidate said people across Nigeria were buying into NNPP, which he adopted a few months ago. He added that before the election next year, particularly when campaigns would start, the party would shock Nigerians with its popularity.

“We will take that goodwill to the South as we have offices from ward to state levels all over Nigeria, and we are fielding candidates for all positions across Nigeria,” Mr Kwankwaso said.

He commended President Muhammadu Buhari for signing the Electoral Act and called for a commitment to a free and fair election.

While condemning those speculating that he would step down for some candidates, Mr Kwankwaso described such speculations as mischievous.