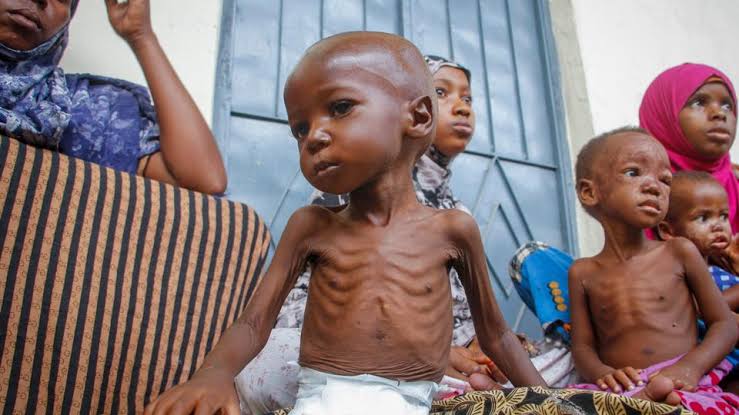 UN agencies on Tuesday warned that catastrophic hunger levels in Somalia have left more than 513,000 children at risk of dying, 173,000 more than during the 2011 famine.

Similarly, FAO said that without action, famine would occur within the next few weeks.

The UN agency added that drought-related deaths “have been occurring” and the toll could be much higher in hard-to-reach rural areas, compared with the number recorded in camps for displaced families.

According to FAO, approximately 6.7 million people across Somalia will likely endure high levels of acute food insecurity between October and December this year (IPC Phase 3 or above).

This includes more than 300,000 who have been left “empty-handed” by the country’s triple emergency and who are expected to fall into famine (IPC Phase 5).

Etienne Peterschmitt, FAO Representative in Somalia, said in pastoral communities where herders had been desperately searching for pasture, were now watching their livestock drop dead like flies.

According to Mr Peterschmitt, the perilous situation of those forced from their homes by hunger in Baidoa town of Bay region in Southern Somalia, was particularly concerning.

“The repeated warnings have been clear: Act now or a famine will occur within the next few weeks.

“The drought situation is spreading at an alarming rate; more districts and regions are facing emergency levels of food insecurity as the cumulative effects of multiple failed rainy seasons take their toll,” he said.

“We know that the deaths, half of the deaths of 2011, happened before the declaration of famine,” El-Khidir Daloum, WFP Somalia Representative and Country Director, said.

“As we speak right now, we are heading to 15 areas classified as hard-to-reach and we are scaling up together with UNICEF, the nutrition and the priority areas.”