The UN agency stated that between 2006 and 2020, over 1,200 professionals lost their lives the same way, and in nine out of ten cases, the killers go unpunished. 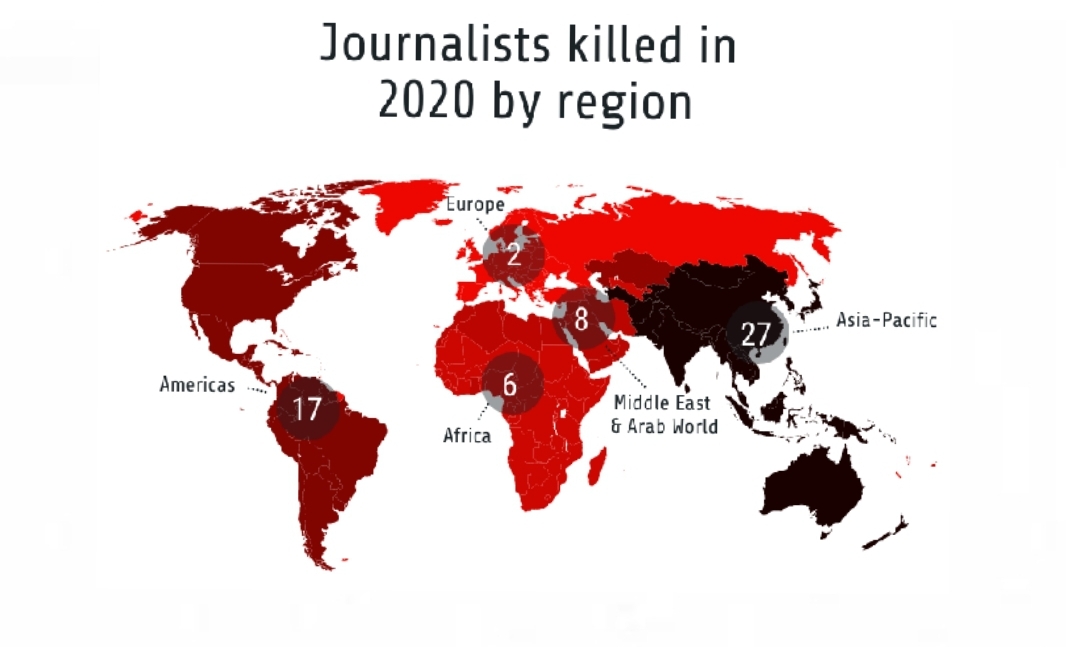 No fewer than 62 journalists were killed just for doing their jobs in 2020, says to UN Educational, Scientific and Cultural Organisation (UNESCO).

The UN agency stated that between 2006 and 2020, over 1,200 professionals lost their lives the same way, and in nine out of ten cases, the killers go unpunished.

In 2021, because of statistics like these, the International Day to End Impunity for Crimes against Journalists is highlighting the important role of prosecutorial services, not only in bringing killers to justice but also in prosecuting threats of violence.

In his message on Tuesday, the UN Secretary-General, António Guterres, noted that many journalists had lost their lives while covering conflict, but the number of media workers killed outside conflict zones, has risen in recent years.

Crimes against journalists have an enormous impact on society because they prevent people from making informed decisions.

Journalists face countless other threats, ranging from kidnapping, torture and arbitrary detention to disinformation campaigns and harassment, particularly in the digital sphere.

For Mr Guterres, “crimes against journalists have an enormous impact on society as a whole because they prevent people from making informed decisions.”

“The COVID-19 pandemic, and the shadow pandemic of misinformation, has demonstrated that access to facts and science is literally a matter of life and death,” he said. “When access to information is threatened, it sends a disturbing message that undermines democracy and the rule of law.”

According to UNESCO’s recent paper, ‘The Chilling: Global trends in online violence against women journalists’, 73 per cent of the women journalists surveyed said they had been threatened, intimidated and insulted online in connection with their work.

The secretary-general urged member states to stand in solidarity with journalists worldwide, showing the political will needed to investigate and prosecute these crimes.

The Director-General of UNESCO, Audrey Azoulay, also marked the day with a message, saying that, for too many journalists, “telling the truth comes at a price.”

“When attacks against journalists go unpunished, the legal system and safety frameworks have failed everyone,” she added. “States thus have an obligation to protect journalists and to ensure that the perpetrators of crimes against them are punished. Judges and prosecutors, in particular, have an important role to play in promoting swift and effective criminal proceedings.”

In recent years, UNESCO has trained nearly 23,000 judicial officials, including judges, prosecutors and lawyers. The training covered international standards related to freedom of expression and the safety of journalists and has placed a particular focus on issues of impunity.

In 2021, the agency’s #EndImpunity campaign is highlighting some of the specific risks which journalists face in their quest to uncover the truth.

“Only by allowing the truth to be spoken can we advance peace, justice and sustainable development in our societies,” Ms Azoulay noted.

Commemorations in 2021 will also pave the way for the 10th anniversary of the UN Plan of Action on Safety of Journalists and the Issue of Impunity, to be marked in 2022.