The seven senior lawyers described Mr Aribisogan’s removal as “an overt and brazen exhibition of illegality and use of brute force under democracy”. 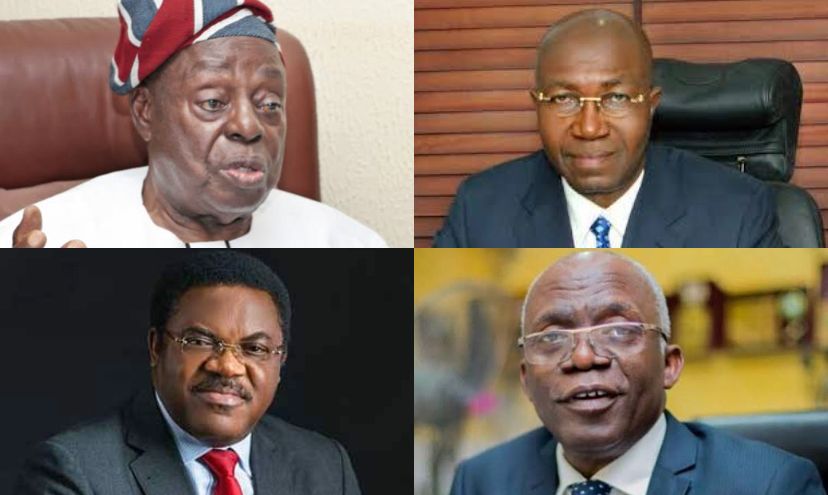 Seven Senior Advocates of Nigeria (SAN), who are indigenes of Ekiti, on Wednesday night, called for immediate restoration of normal constitutional order in the State House of Assembly They asked for the return of Gboyega Aribisogan as the Speaker.

Led by Afe Babalola, in a statement issued at the end of an emergency review of the crisis in the Assembly, the legal luminaries described Mr Aribisogan’s impeachment as “gross display of rascality, impunity”.

According to them, the direct implication of the negative development in the state Assembly, if not tamed in record time, is that the new state governor, Biodun Oyebanji, is not safe from an imminent impeachment.

The seven senior lawyers described Mr Aribisogan’s removal as “an overt and brazen exhibition of illegality and use of brute force under democracy”.

They, however, called on Governor Biodun Oyebanji of Ekiti to watch his back, saying “keeping mute to this reckless abuse of power can boomerang and embolden the lawmakers to go after him in the near future”.

The lawyers warned those they described as “godfathers in Ekiti politics” to be wary of their actions and stop perpetrating acts that could ignite more serious crises that may trigger instability in the state.

They decried the speedy way at which the lawmakers allegedly prodded by some godfathers to move against Mr Aribisogan, under flimsy excuses and unleashed their venom on him.

According to them, the 1999 Constitution, as amended, stipulates that the embattled Mr Aribisogan ought to be given a fair hearing to defend any infraction he had allegedly committed to warrant impeachment.

They argued that this window was not provided or given “a scintilla of consideration”.

“To say the very least, the situation in the Ekiti State House of Assembly should be of extremely grave concern to every decent and discerning mind.

“Before going further, it is pertinent to underscore the prime importance of the State House of Assembly in the affairs of any state in the country.

“By virtue of Section 92 of the Constitution of the Federal Republic of Nigeria, 1999 (as amended), once elected by the members of the House, as done in the case of Aribisogan, the Speaker shall continue to be in office during the lifespan of the particular House except, inter alia, removed from office by a resolution of the House of Assembly by the votes of not less than two-third majority of the House.

“From the short background above, it is plain as day that the elected Speaker was not allowed to function in office for the space of one day before the sealing off of the Complex.

“Therefore, at what point in time could he have committed any infraction of the constitution, any other law or the Rules of the House to warrant his supposed removal?

“Assuming and without conceding that the Speaker had committed any infraction, was he not entitled to be confronted with the allegation in that respect and given reasonable opportunity to defend himself?

“If so, when was he accorded that? Incontestably, election into such an exalted position as the Speaker of the House dictates that a holder of the office must be accorded fair hearing before being removed from the office,” the senior lawyers said.

They said that the alleged impeachment and stoppage of the salaries of the Speaker and six other members of the House are no less “misplaced, illegal, illegitimate, null and void”.

“If care is not taken and if all of us seal our lips, fold our arms and get relaxed on our seats and allow this rascality and impunity to go unchecked, in no distant future, the Governor of the State would be impeached and forced out of office in like manner,” they said.

The senior lawyers said that by the actions of the lawmakers, they had demonstrated a penchant for political rascality, impunity, brazenness and recklessness of no mean measure.

“Let it be mentioned and registered, posthaste, without any modicum of equivocation, that the purported impeachment of Gboyega Aribisogan, as well as the announced suspension of seven members of the House, is an exercise in utmost futility and, unquestionably, null and void,” they said.